The Art of Weaving: Jason Curley ’13 Reflects on His Culture and Museum Exhibition

In early February, The Boston Globe gave the Hood Museum of Art’s Native American Art at Dartmouth exhibition a rave review, calling it one of “the most thrilling shows you are likely to see this year.” 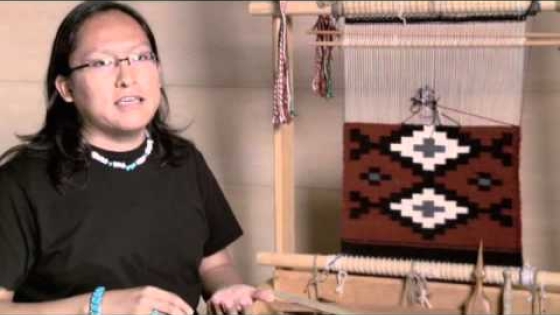 Among the objects on display are a pair of hand-woven Navajo rugs, one made by Jason Curley ’13 and the other by his late grandmother Helen Curley.

Helen Curley died at age 81 in December 2011, just a few weeks after traveling to Hanover with Jason’s mother Yolanda Curley, stepfather Peter Lincoln, and maternal grandmother Mary Shepherd to view the exhibition. During her visit to campus, Helen Curley beamed proudly as she gazed at the pair of rugs hanging side-by-side on the wall of the museum. “Nizhoni. Nizhoni,” she repeated quietly, the Navajo word for “beautiful.”

“My grandmas were so proud to see our rugs on display,” says Curley, who grew up on the Navajo Nation in Ganado, Ariz., and spent a lot of time with Helen, his paternal grandmother. “My grandma Helen was very quiet, but she would talk for weeks about the trip and seeing her work displayed in a well-known museum, right next to my work. We shared a relationship that was unique. I’m really blessed to have been able to share a museum exhibit with her.” 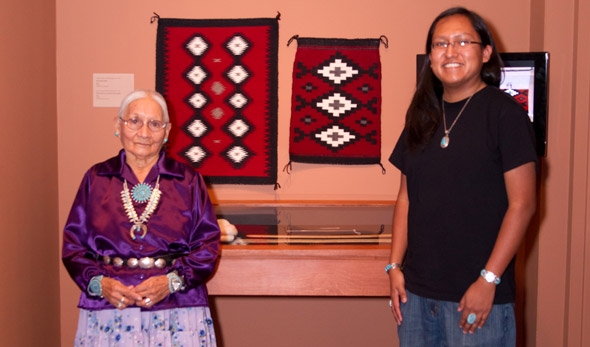 Jason Curley ’13 and his late grandmother, Helen Curley, shared a proud moment together last fall at the Hood Museum of Art. The hand-woven Navajo rug on the left was made by Helen, who traveled to Hanover in November 2011 to see her and her grandson’s work (at right) displayed in the Hood’s Native American Art at Dartmouth exhibition. (photo by Eli Burak ’00)

Curley, a 2009 graduate of Saint Michael Indian School in St. Michaels, Ariz., was taught weaving by his grandmother Helen. He and his cousins assisted her on her large loom from the time they were small children, but Curley only took up the craft himself in the summer of 2010.

At the beginning of his sophomore year, he brought a small loom with him to Dartmouth, and now he weaves for relaxation in his room at the Native American House, where he is the undergraduate resident assistant.

Curley acknowledges that weaving is still perceived as a female occupation among Navajo elders, but says that in pre-colonial times weaving was largely a male activity and that more men are starting to practice the craft again.

When the Hood approached Curley to film a video about weaving for the Native American Art at Dartmouth exhibition, he suggested to Karen Miller, the exhibition’s in-house curator, that they include rugs woven by himself and his grandmother in the exhibit.

“Given our desire to encourage student participation in the exhibition and to tell the story of Native life at Dartmouth, we jumped at the chance to include these works,” says Michael R. Taylor, the Hood’s director.

“I thought it would be a good way to exemplify a Native American student at Dartmouth staying connected to his heritage and doing a form of art,” Curley says. “But I am really happy for my grandmother, my shinálí or paternal grandmother, because being in a museum is not something a lot of rug weavers get to do, especially someone of her generation.”

“And I wanted her there next to me in the museum because she’s the one I credit for countless things in my life,” he continues. “She’s been a support to me throughout my entire education. I think it was a very good way to show my appreciation and respect to her.”

Curley, who is a Native American Studies major with a digital arts minor, plans to earn a postbaccalaureate degree after Dartmouth and then attend medical school.

He had an internship with Partners in Health the summer after his first year at Dartmouth, working with the community health representatives on the Navajo Nation. After completing medical school he plans to return to the Navajo Nation to practice medicine and develop more effective health care policies.

The Native American Art at Dartmouth exhibit continues at the Hood through Sunday, March 11.