From the microstructure of snow to the massiveness of ice sheets, from fundamental science to practical applications, from Thayer’s ice lab to the earth’s polar regions, Thayer researchers are uncovering what snow and ice reveal about the world. 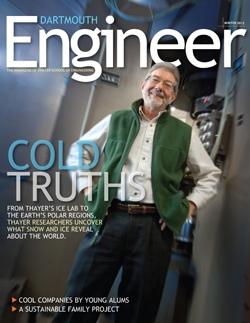 Professor Erland Schulson, the director of the Thayer School of Engineering’s ice lab, is one of several researchers studying snow and ice through an array of scientific methods. (photo courtesy of Dartmouth Engineer)

Professor Erland Schulson opened his ice lab in the basement of Cummings Hall 29 years ago to study the basic physics and mechanics of ice. “The object is to understand the physical processes that lead to creep and fracture,” says Schulson. “But this is not done in isolation of the world’s issues. Issues are driving the work.”

In addition to Schulson, Dartmouth Engineer features the research of Professor Ian Baker on applying the physics of metals to the study of ice, Professor Mary Albert on using ice to record climates, Professor Donald Perovich on on how ice amplifies climate change, Professor Laura Ray on the use of robots to map crevasses on ice sheets, and Professor Victor Petrenko’s investigation of de-icing technologies.