Dartmouth today announced the naming of its visual arts center in honor of Leon Black, Class of 1973, and his wife Debra, who are contributing $48 million toward the new state-of-the-art visual arts center, opening September 2012. Designed by Machado and Silvetti Associates, the Black Family Visual Arts Center will house the Departments of Studio Art, Film and Media Studies, and the nascent Digital Humanities program. The 105,000-square-foot sustainably designed building will serve as an intellectual and cultural hub in Dartmouth’s new Arts District, which includes the Hopkins Center for the Arts and the Hood Museum of Art, both of which are initiating expansion projects. 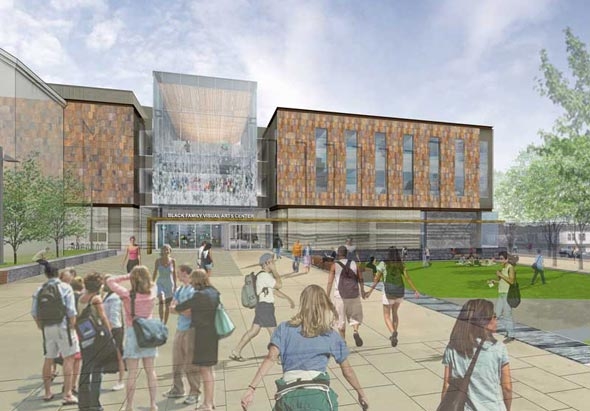 When the Black Family Visual Arts Center opens in September 2012, a new site-specific wall sculpture by renowned American abstract artist Ellsworth Kelly will hang on the east façade of the Hopkins Center, facing the building. The work of public art has been commissioned by the Black family. (Artist’s rendering by Machado and Silvetti Associates, Inc.)

“This visionary gift recognizes the centrality of the visual arts in our lives and the value of visual literacy for all,” said President Jim Yong Kim. “The work enabled by the Black Family Visual Arts Center—the artistic explorations, interdisciplinary collaborations, and discovery of new ideas and modes of expression—will have a lasting impact on our students and our understanding of the role of the visual arts across disciplines.”

“Our faculty is already galvanized by the opportunities this new building will create for them and our students,” said Dean of Faculty Michael Mastanduno. “As a creative catalyst for original student and faculty work that can intersect all media and as a recruiting tool for exceptional new faculty, this building is a game-changer.”

Speaking for his family, Leon Black said, “We hope this building fosters creativity among Dartmouth’s students and faculty—that it inspires them to dream big, be courageous, take artistic risks—and infuses them with the life-changing power of the visual arts.”

Architects Machado and Silvetti, whose recent works include the Getty Villa in Malibu, Calif., and additions to Bowdoin College’s historic Walker Art Building, have designed the Black Family Visual Arts Center to promote cross-disciplinary interaction. At the heart of the building will be the Arts Forum, a three-story atrium designed to foster the collegial sharing of ideas among students and faculty and to allow for the presentation of electronic media. An Arts Plaza, featuring a formal lawn and hardscape sculpture terrace, will connect the new center with the Hopkins Center and the Hood Museum, and serve as a gateway from downtown Hanover to the College.

The exterior of the building is a rich and warm composition of natural materials. Each major component of the exterior is intended to engage in a dialogue with the building’s programmatic mission of creating craft through artful forms. Examples include digitally filtered natural patterns etched onto the structurally glazed entries, cast-concrete panels patterned with the impressions of reclaimed timber, an open-grid rain screen of autumnal-hued Norwegian slate, and rustic Vermont slate cobbles that serve as the pedestrian-level base of the building.

In keeping with Dartmouth’s energy conservation guidelines, the three-story center will maximize natural light and is engineered to achieve LEED Gold certification for energy efficient and sustainable building practices. Its many energy-saving technologies include in-floor and chilled beam radiant heating and cooling, occupancy sensors for lighting and ventilation, rainwater collection and reuse, and daylight harvesting and daylight sensing lighting systems.

Dartmouth also announced that the Black family has commissioned a major site-specific work by renowned American abstract artist Ellsworth Kelly. The work will be installed in advance of the building’s dedication in September on the east façade of the Hopkins Center, facing the new Black Family Visual Arts Center.

“Public art of the caliber of the exciting new Ellsworth Kelly piece enriches the environment in which we live, work, and study, and will play a vital role in exposing Dartmouth students and the wider community to a diverse range of works by contemporary artists,” said Michael Taylor, chair of the Public Art Committee and director of the Hood Museum of Art at Dartmouth College. “We are actively pursuing extended loans of public sculpture, as well as commissions of significant new works for the dynamic space where the Black Family Visual Arts Center, the Hopkins Center for the Arts, and the Hood Museum of Art intersect.”

“Having worked closely with the Black family and members of our faculty on this project, I know the family’s belief in the power of the arts and our artists to transform lives is a gift that will have tremendous impact,” said Provost Carol Folt. “The Black Family Visual Arts Center will be a powerful force at Dartmouth for years to come. We are indebted to Leon and Debra for their vision, passion for the arts, and generosity.”

Leon and Debra Black are longtime patrons of the arts and leading art collectors. In addition to their commitment to Dartmouth in support of the visual arts, the Blacks have established Dartmouth professorships in Shakespearean Studies and Jewish Studies; given generously through the Dartmouth College Fund; and supported many Dartmouth initiatives, including Kemeny Hall, the Roth Center for Jewish Life, and the Morton Farm.

Leon Black, who graduated summa cum laude from Dartmouth College in 1973 with a major in philosophy and history and received an MBA from Harvard Business School in 1975, is the founder, chairman, and CEO of Apollo Global Management, L.P., a global alternative asset manager that has over approximately $100 billion in assets under management. From 1977 to 1990, Leon worked at Drexel Burnham Lambert Incorporated, where he served as managing director, head of mergers and acquisitions, and co-head of corporate finance. He served as a trustee of Dartmouth College from 2002 to 2011, and currently serves on the boards of The Museum of Modern Art, Mt. Sinai Hospital, The Metropolitan Museum of Art, Faster Cures, and the Asia Society. He also serves on the board of directors of Apollo Global Management, AP Alternative Assets, Sirius Satellite Radio Inc., and on the international advisory board of the Russia-China Investment Fund, and is a member of The Council on Foreign Relations, The Partnership for New York City, and the Port Authority Task Force.

Debra Black is chair of the board of directors of the Melanoma Research Alliance, which she co-founded with her husband to accelerate progress toward a cure of one of the fastest growing cancers in the U.S. In 2010 she was the subject of an interview about her own successful battle with melanoma, published on the website of the women’s health advocacy organization Women’s Voices for Change. A producer of major Broadway plays and musicals, Debra serves on the boards of Lincoln Center Theater, The New York State Council on the Arts, and Rockefeller University. Her productions include The Pillowman, Tony Award winners The History Boys and August: Osage County, Butley, The Vertical Hour, The Year of Magical Thinking, Deuce, Inherit the Wind, Frost/Nixon, Coram Boy, Gypsy, Thurgood, The Country Girl, Mary Stuart, Superior Donuts, and A Behanding in Spokane. She received her BA from Barnard College in 1976 with a major in comparative literature and theater.

The Blacks have three sons, Benjamin, Joshua, and Alexander (’11), and a daughter, Victoria. Benjamin, who attended Dartmouth for a year and received his BA from the University of Pennsylvania in 2007, worked as an analyst at Goldman Sachs before enrolling in the joint JD/MBA program at Harvard University. Joshua received a BA from Princeton University in 2008, and currently works with Apollo Management after three years as an analyst at Goldman Sachs. Alexander is a 2011 graduate of Dartmouth, where he majored in English, sang bass in the Glee Club, and completed a transfer term at the University of Otago in Dunedin, New Zealand. He is currently studying filmmaking at New York University’s Tisch School of the Arts. Victoria, a sophomore at Harvard, participated in the Rassias Foundation’s Accelerated Languages Programs while a student at the Trinity School in Manhattan, and is now the acting Treasurer of the Harvard Lampoon.