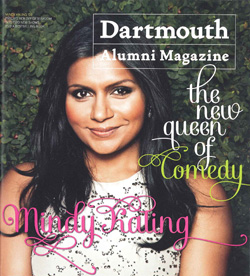 Mindy Kaling ’01 is an actress on—as well as a writer and executive producer for—NBC’s The Office. She is also the author of the 2011 book Is Everyone Hanging Out Without Me? (And Other Concerns). (photo courtesy of Dartmouth Alumni Magazine)

There are many things Mindy Kaling is grateful for. One is that she isn’t so famous that she can’t still travel in comfy clothes. “I was on a flight from L.A. to New York with the Kardashians once, and they were decked out head to toe, makeup, heels, like the whole thing. Wouldn’t that kill you?” she says. “I have a really great level of fame, because most people don’t recognize me, and if they do, it’s in the best way, like, ‘I love your writing and I love the show.’ It’s not like people are shouting out questions about my sex life.”

She may not have the luxury of flying under the radar for much longer. On top of playing the shallow but shrewd Kelly Kapoor on NBC’s The Office, where she’s been a writer since 2004 and just got a bump to executive producer, Kaling’s wattage continues to rise thanks to her bestselling book, Is Everyone Hanging Out Without Me? (And Other Concerns); a role in the romantic comedy Five-Year Engagement (due in April); and a new prime-time animated series hitting TV this fall that she’ll produce, write and voice. Also in the works: a sitcom pilot she’s written, in which she’ll play the lead role, and a screenplay in development called The Low Self-Esteem of Lizzie Gillespie. As her Office costar Rainn Wilson, who plays Dwight Schrute, puts it: “Good ideas shoot out of her like popcorn.”