Drama Looks Inside the Thoughts of Returning Military Veterans

ReEntry, an acclaimed work of documentary theater, is coming to the Hopkins Center Wednesday and Thursday, April 4 and 5. The drama sheds light on the sometimes funny, sometime tragic, always difficult experience of war veterans returning to civilian life. 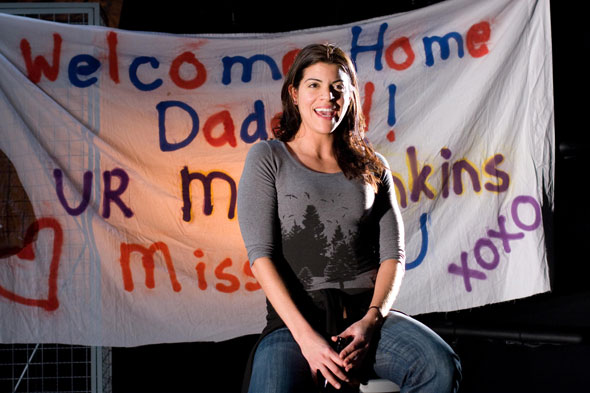 ReEntry is a work of documentary theater that sheds light on the experiences of war veterans returning to civilian life. The ReEntry performances on April 4 and 5 are part of a three-day residency by American Records Theater that includes a free panel discussion, entitled “Fallout: What We Think About the Military Matters,” on Tuesday, April 3, at 4:30 p.m. in Dartmouth’s Filene Auditorium. (photo by Mark Garvin)

Created in 2009 and performed in theaters and military bases around the world, ReEntry, by American Records Theater, has been called “provocative and powerful” (New York Times).

The Hop performances are part of a three-day residency by American Records that includes a free panel discussion on Tuesday, April 3, at 4:30 p.m. in Dartmouth’s Filene Auditorium, entitled “Fallout: What We Think About the Military Matters.” ReEntry director KJ Sanchez will be joined by author Nancy Sherman (The Untold War) and a Dartmouth student veteran to discuss the challenges posed by public perceptions of the military, including civilian response and representations in the arts. During the residency, the artists will also meet with local veterans and Dartmouth students.

ReEntry contains mature language and is recommended for ages 14 and older.

Also coming to the Hop:

An international musical inspiration for more than 40 years, Brazilian composer and multi-instrumentalist Hermeto Pascoal and his band come to the Hop’s Spaulding Auditorium on Thursday, April 5, to serve a heady concoction from their dazzlingly rich musical universe of jazz, rock and folkloric styles. The performance is one of only four U.S. shows for the legendary artist.

Hermeto Pascoal, a Brazilian composer and multi-instrumentalist, will perform with his band at the Hop’s Spaulding Auditorium on Thursday, April 5. (photo courtesy of Hermeto Pascoal)

For a full listing of upcoming performances at the Hopkins Center for the Arts, please visit Live at the Hop.