Twenty-two scholars—in fields including economics, history, government, Spanish and Portuguese, computer science and earth science, as well as two new members of the Thayer School of Engineering faculty—joined the Dartmouth faculty of arts and sciences this academic year, launching their courses and establishing their research programs. In this week-long series, Dartmouth Now profiles four of the newest members of the faculty.
Image 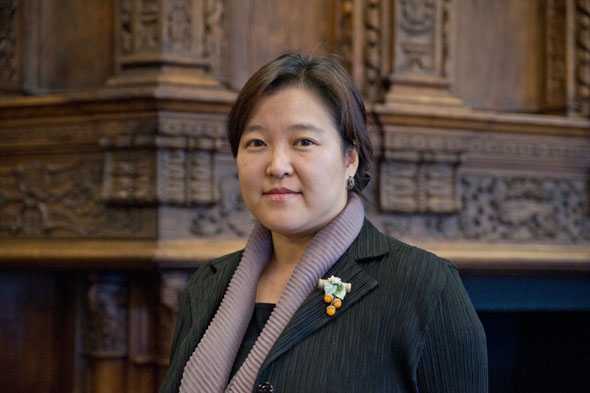 Sung Lim Kim, who specializes in Korean art, joined the Dartmouth faculty this fall as an assistant professor of Asian and Middle Eastern studies and of art history. (photo by: Eli Burak ’00)

Sung Lim Kim is assistant professor of Asian and Middle Eastern studies and of art history. Originally from Seoul, she specializes in Korean art. Kim holds a PhD from the University of California – Berkeley, and comes to Dartmouth from a position as lecturer in UC Berkeley’s Department of the History of Art. Kim has also previously served as a curator and researcher at the Asian Art Museum, San Francisco.

In this interview, Kim explains why her field is primed for transformative discoveries, highlights the importance of mentoring—and reveals a hidden talent.

Unexplored territory: It was the scarcity of Korean art objects in U.S. art museums compared to the scale of exhibits devoted to its neighbors, China and Japan, says Kim, as well as the underrepresentation of Korean art and culture in her undergraduate art history classes, that drew her toward her specialization. “Even in Korea, contemporary scholarship on Korean art history is an emerging discipline. Korea has struggled through many historical traumas during the last century, and is still divided into two countries with conflicting political ideologies. Korean art history has been a political football, used for propaganda purposes by those vested in colonial, anti-colonial, nationalistic, and other ideological agendas.  It is my goal to re-examine Korean art history, filling in the gaps, exposing and removing the biases, and reviving issues that have been ignored and buried.”

On the horizon: “Korean art history as we know it in South Korea and the West today has been only half a history, because of Korea’s division and lack of academic and cultural interactions and exchanges.  North Korean museums are full of treasures that southern scholars have not seen for over fifty years, and vice versa. Thus, the two Koreas each produce their own historiographies.” Within the next ten years, Kim says, “I hope and believe that there will be many active cultural and intellectual exchanges between the two Koreas, which will greatly broaden our understanding of Korean art and culture and, I think, transform the field.”

Mentors matter: “I had three great mentors who supported and encouraged me: Professor Patricia Berger at UC Berkeley, Professor Marsha Haufler at the University of Kansas, and Dr. Kumja Kim of the Asian Art Museum of San Francisco, where I worked for five years as an assistant curator. They were my role models as female art historians, balancing family life and professional careers with top-notch scholarship.”

Dartmouth connections: “The close relationship between students and professors in class and outside of class is my outstanding Dartmouth experience so far. Going through a large state university system, I never had casual and close relationships with my professors as an undergraduate.  At Dartmouth, I have been invited to lunch with students, and we have many personal and academic conversations in casual settings, outside of class and office.”

Dartmouth Idol? “Many young people are now excited about Korean pop music—K-pops. Well . . . even though I have not kept up with the latest K-pops and stars, I am a good singer of 80s K-pops music.”