This academic year brought a season of milestones for Dartmouth men’s hockey. Head Coach Bob Gaudet ’81 earned his 300th win on October 28, and the program—founded in 1905-06—earned its 1,000th win on December 30. 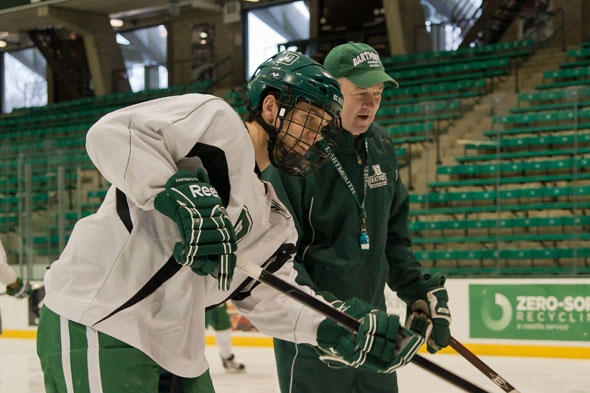 “I think it’s great that our players can get a world-class Dartmouth education, play a top Division I schedule, and go on to the pros,” says Gaudet, who has sent nine players to the NHL during his 15 seasons as head coach. “There’s a commonality in terms of work ethic among these guys. They worked hard at their games before and after practice, and they worked hard academically.”

Stempniak, who plays for the Calgary Flames, credits Gaudet with preparing him for the NHL. “He used practices as a time for individual skill development, which made me a better offensive player,” says Stempniak, an economics major. “Most coaches only practice systems and the team game, but once a week we had a practice devoted entirely to skill development.”

“Dartmouth had a great combination of academics and hockey,” says the Pittsburgh Penguins’ Ben Lovejoy ’06, who transferred from Boston College after his freshman year.

While Dartmouth had no NHL players at that time, Lovejoy says Stempniak inspired everyone when he signed with the St. Louis Blues in 2005. “I think a lot of us hoped that we would be able to make it, too,” recalls the history major, whose brother Nick Lovejoy ’14 is a Big Green defenseman.

In addition to Gaudet and the coaching staff, Dartmouth’s NHL players cite Bob Miller, the Holekamp Family Strength and Conditioning Coach, as an important part of their development.

“Before college I had never done much Olympic lifting,” says Jones, a right wing for the Avalanche. “He definitely had a big impact on increasing my size and overall strength.”

Adds Tanner Glass ’07, a history major who plays for the Winnipeg Jets, “Bob Miller was instrumental in my success at Dartmouth as well as through today. He was adept at tailoring each athlete’s program to best suit the individual and was a great teacher in the weight room.”

But for all the players, it always comes back to Gaudet and the hockey and life lessons he imparts.

“Coach G demands accountability and a good attitude,” says Johnson, a psychology major whose mother Ann VanCuran Johnson ’77 was a Dartmouth alpine skier and father Kevin Johnson ’77 was the hockey team’s leading scorer in 1977. “I had a bad habit of getting frustrated if things weren’t going my way, but he taught me to always stay with it every shift even if things don’t seem to be going right

“Coach G was great at instilling in us [the need] to have an extreme passion when we played, and to bring a consistent effort every night,” adds the Tampa Bay Lightning’s J.T. Wyman ’08, an economics major. “I’m in my fourth year of professional hockey and consistency is one of the hardest skill sets to master. And it’s the players who are the most consistent who end up playing at the highest level.”