President of the Republic of Kosovo to Visit Dartmouth March 6

In a March 6 visit to Dartmouth, Kosovo President Atifete Jahjaga will discuss her country’s difficulties and accomplishments following the independent nation’s fight for self-determination 13 years ago.

Jahjaga’s speech, “The Kosovo Story: Challenges and Successes in State-Building Processes,” will be delivered at 4:30 p.m., in the Hopkins Center’s Moore Theater. The public is invited. Seating will be on a first-come basis.

Dartmouth has had strong ties with Kosovo since the war with Serbia ended in 1999, first providing medical care in the war-torn region and later through a partnership with American University in Kosovo.

“The longstanding relationship Dartmouth has had with Kosovo is an important one to our community,” says Dartmouth President Jim Yong Kim. “We are proud of our ongoing commitment to help the Kosovar people improve their health-care system and excited about our more recent efforts to help the American University in Kosovo prepare its next generation of leaders. President Jahjaga’s visit gives us a wonderful opportunity to celebrate our partnership.”

President Jahjaga began her professional career as a police officer, rising to the position of director of police in 2009, a post she held until her election to the presidency last April, at the age of 35. She is the fourth person elected president of the new nation.

She will spend time during her two-day visit to Dartmouth meeting and discussing a variety of issues—including leadership and health care—with faculty, students, and administrators. The president will also attend an undergraduate class on state creation, taught by John Carey, the John Wentworth Professor in the Social Sciences.

“President Jahjaga’s visit to Dartmouth is a testament to her support for education and, in particular, for the Dartmouth-American University in Kosovo partnership,” says Provost Carol Folt. “We are thrilled about our work together, especially now, as increased global collaboration between universities is reshaping our world. Our efforts will surely enrich the lives of our students and faculty, here and in Kosovo.”

The Dartmouth-Kosovo connection began when Dartmouth Medical School faculty and physicians from Dartmouth-Hitchcock Medical Center provided critical care to refugees after the war. The relationship grew to offer opportunities for medical students, physicians, and nurses to participate in exchange programs, and there have been more than 200 exchanges of medical faculty and students from Dartmouth and Kosovo.

Two years ago, Dartmouth and American University in Kosovo signed an agreement that has Dartmouth working with Kosovo’s only private nonprofit university on a number of initiatives, including assisting the eight-year-old university prepare for U.S. accreditation, conducting faculty and student exchange programs, and supporting curriculum development.

Also, in June, a group of Dartmouth students and recent graduates traveled to Kosovo and, working with American University in Kosovo students, helped restore a Jewish cemetery in Pristina.

Dartmouth Professor of Health Economics and Management Michael Zubkoff is a member of the AUK Foundation—which operates like a board of trustees—at the university. Zubkoff is director of the MD/MBA program at Dartmouth and teaches at the Tuck School of Business and the Dartmouth Institute for Health Policy and Clinical Practice. AU Kosovo is the only university in Kosovo whose faculty teach entirely in English, which helps the school attract students from throughout the country.

Following her visit to Dartmouth, President Jahjaga will take part in the Women in the World Summit in New York City, a conference featuring women who are leaders and activists around the globe. The event, sponsored by Newsweek and the online Daily Beast, will also feature former Secretary of State Madeleine Albright, IMF Chief Christine Lagarde, and actor Meryl Streep. 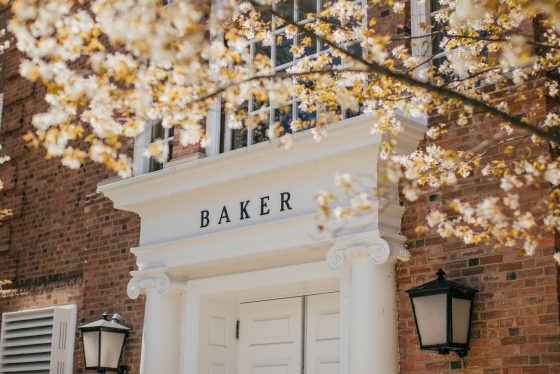