As a child, Assistant Professor of Earth Sciences Bob Hawley was fascinated by tales of polar exploration splashed across the pages of National Geographic. This spurred an interest in the Earth’s frozen precincts as well as a quest for answers to some of the most chilling questions facing the planet.

As part of Professor Bob Hawley’s research on the internal dynamics of “big ice,” his team of international colleagues operate a pressurized, hot-water drill on the 600-meter thick Greenland ice sheet. (photo by Blaine Morris)

Hawley’s research has taken him to Antarctica and Greenland, lands covered with ice sheets that are miles deep. He seeks to understand the dynamics of the massive ice sheets, which are sensitive to climate change and potential contributors to sea level rise.

Intellectual adventure: As an undergraduate at the University of Washington, Hawley found his career path through a chance encounter with a friend who was en route to the Antarctic. Hawley was inspired and a year later he, too, was heading south as part of a National Science Foundation program for undergraduates.

“I was one member of a four-person team, spending six weeks at a remote field camp on the eastern Antarctic polar plateau,” Hawley recalls. “It was a life-changing experience.” He subsequently spent a summer in Greenland followed by a long winter stint on the 3,000-meter summit of the Greenland ice sheet 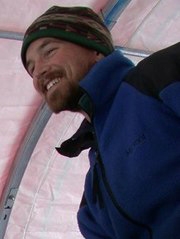 Tool making: Early in his career, Hawley lowered a video camera into boreholes to elucidate changes in the compacted snow and ice over time. In refining the video technique, he produced an innovation now known as Borehole Optical Stratigraphy.

The technique is based upon crystal structure differences in the borehole wall, represented by alternating layers of dark and light. These correspond to annual cycles of deposition and compaction—much like tree rings reflecting annual growth. These cyclical processes directly affect the character and direction of changes in the ice sheet over time.

Prior to implementation of this new approach, information on the ice’s density profile and history was accessibly only through the study of ice cores.

Hawley’s technology reduces cost and effort since cores need not be recovered, transported, and preserved. It is also yielding new and more accurate information about the dynamics of the ice sheets and their potential effects on global weather systems and sea levels.

“One of the thrusts of my research is taking an existing data set or an existing instrument and squeezing more information out of it,” Hawley remarks. 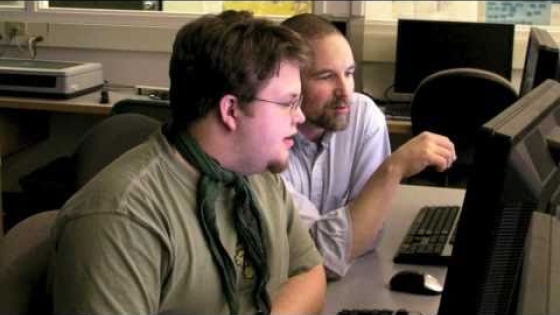 Kellie MacPhee ’14 is one of four undergraduates recently involved in research with Professor Bob Hawley, whose own experiences as a student in the Arctic and Antarctic fueled his desire to “keep this moving in the direction I went.”

MacPhee worked in Hawley’s lab in winter and spring 2011 through Dartmouth’s Women In Science Project (WISP). “It was really great for me to be able to see what research is like,” says MacPhee. “When I was looking at colleges, people were constantly talking about research opportunities. I didn’t even know why I was supposed to want to do research.”

A mathematics major, MacPhee found working with graphs particularly interesting. “In attempting to identify similarities between graphs, I would get really excited when I discovered the same bump in two different graphs that could mean correlation,” she recalls, noting that, “It was pretty technical and difficult to explain to others why I was so excited.”

She is continuing to share her love of discovery as an education intern at the nearby Montshire Museum of Science in Norwich, Vt.

Since 1991, WISP has been helping Dartmouth women learn and thrive in science, engineering, and mathematics. About 300 students participate in WISP programs—including internships and mentorships—each year.

Insight from above: In the past few years, Hawley has begun working with remotely sensed radar altimeter data from aircraft and the European Space Agency’s Cryosat-2 satellite. While designed only to see where the surface of the ice sheet was, Hawley showed that high-altitude radar could also see underneath the surface.

“There is a strong radar reflection from the surface, but you also see other smaller reflections from depth,” says Hawley. The beauty of this, to Hawley’s delight, is that the remote sensing data correlate well with his borehole stratigraphic information.

Sleeping giants: Today Hawley is still trying to understand the behavior of the polar ice sheets. Determining the mass balance of the ice—the net result of snow accumulation above and melting below—is at the heart of the matter and constitutes the focus of most of his projects on Greenland.

Hawley notes that the Greenland ice sheet has been losing mass over the last five to ten years, but cautions that we must look elsewhere for the source of the 20th-century and predicted 21st-century sea level rise. According to the Intergovernmental Panel on Climate Change (IPCC), global average sea level rise in the 20th century was approximately 20 centimeters (cm) and the predicted value for this century is 20 to 60 cm.

“The small glaciers and icecaps of the world are retreating at a significant rate and seem to be the largest contributors to sea level rise,” Hawley points out.

“But even if you melted all of the smaller glaciers and icecaps in the world, that sea level rise would still pale in comparison to melting Greenland,” which he says could raise sea level 6 to 7 meters. “The ice sheets are the sleeping giants and they have the greatest capacity to change sea levels.”