Scholar and Writer Ben Wildavsky on the Globalization of Education

Research scholar and writer Ben Wildavsky, a lecturer in the “Leading Voices in Higher Education” series, recently visited campus to talk about the development of a global marketplace in education which he says has “students criss-crossing the world, and has research collaboration on an unprecedented level.” 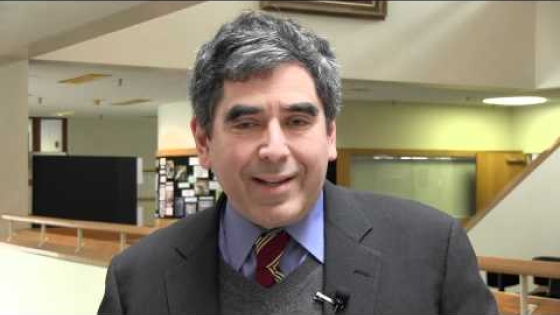 During his recent visit to campus, Wildavsky spoke with Dartmouth Now about his research and told a crowd in the Rockefeller Center that, “Knowledge is a public good. It can’t be contained in one country and that’s great. It means that research advances in one nation can be used by academics and innovators all around the world.”

“My real argument is that globalization is a real opportunity. It’s not really something to worry about. That’s fundamentally because it’s not a zero-sum game. If other countries make great advances, in China, in South Korea, in the Middle East, that’s something that we should applaud. We shouldn’t worry about it,” he says.

Wildavsky is a senior scholar at the Kauffman Foundation and former education editor of U.S. News & World Report, where he was editor of “America’s Best Colleges” and “America’s Best Graduate Schools.” He has also worked as a magazine and newspaper writer, and currently blogs for The Chronicle of Higher Education.

During his recent visit to campus, Ben Wildavsky, a senior scholar at the Kauffman Foundation, discussed the impact that globalization is having on education. (photo by Corinne Arndt Girouard)

He is the author of the award-winning book, The Great Brain Race: How Global Universities Are Reshaping the World. The book is being translated into Chinese, Vietnamese, and Arabic.

The next speaker in the Leading Voices series is social psychologist Roy F. Baumeister, who will speak Tuesday, March 27 at 4:30 p.m., in Moore Hall’s Filene Auditorium.

Baumeister, the Francis Eppes Professor of Psychology at Florida State University, is one of the world’s leading social psychologists, known for pioneering work on the self, social rejection, sexuality, self-esteem, aggression, consciousness, and free will. He is the author of more than 30 books, most recently Willpower: Rediscovering the Greatest Human Strength. [[{“type”:“media”,“view_mode”:“media_large”,“fid”:“”,“link_text”:null,“attributes”:{“height”:“443”,“width”:“590”,“class”:“media-image media-element file-media-large”}}]]