Arlinda Rezhdo ’14 cradled a history book about Kosovo that had just been given to her by Atifete Jahjaga, Kosovo’s president, who spent March 6 and 7 at Dartmouth, where she delivered a lecture; presented an award to former Dartmouth Medical School Dean James Strickler; and met with students, faculty, and physicians.

The book’s inscription read: “With my greatest wishes. Keep being a good example, Atifete Jahjaga.” 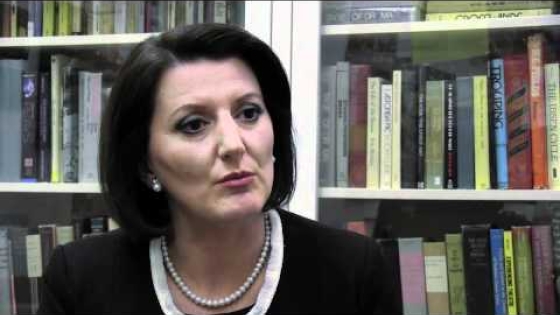 “It’s amazing,” says Rezhdo, who is from Tirana, Albania, Kosovo’s eastern neighbor, as she showed the book to friends who are also from the Balkans.

But it was Jahjaga who was the good example. As one of the five youngest heads of state in the world, the 36-year-old Jahjaga was hailed as an inspiration by Dartmouth students; she also impressed female faculty members with her drive to improve the status of Kosovo women, and made connections with Dartmouth Medical School physicians who are exploring ways to help Kosovars improve their country’s health care.

“She is such a strong woman and her influence is felt throughout the world,” said Ilda Bajraktari ’11, also from Tirana, Albania.

At the end of the visit, Jahjaga and Dartmouth officials pledged to continue to find ways to work together.

“Hopefully, this visit to Dartmouth is going to set up a good foundation,” Jahjaga said. “We need strong partners.” 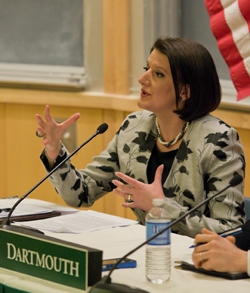 During her visit to campus, Kosovo President Atifete Jahjaga said she would like her country’s minister of health to visit Dartmouth and meet with medical school leaders. Dartmouth and the American University in Kosovo have also agreed to collaborate on the creation of a women’s leadership institute. (photo by Eli Burak ’00)

Provost Carol Folt said the visit “cemented our long-standing relationship. It opened the doors for us to do more and it complements our partnership with the American University in Kosovo, where we remain deeply engaged.”

The two institutions agreed to collaborate on the creation of a women’s leadership institute at American University in Kosovo, which has had an affiliation with Dartmouth since 2010.

“It is privilege to continue and expand our collaboration,” said Laurel Stavis, executive director of the Dartmouth-American University in Kosovo Project. “Kosovo’s story is one of extraordinary achievement over a short period of time and President Jahjaga has propelled Kosovo forward by the power of her vision, her accomplishments, and her dedication to the people she leads.”

Jahjaga also said she wants her country’s minister of health to visit Dartmouth and meet with medical school leaders.

Dartmouth has strong ties to Kosovo, forged following the country’s war with Serbia, which ended in 1999. It was then that Dartmouth Medical School faculty began providing primary medical care to refugees, which later developed into faculty and student medical exchanges that now number more than 200.

Retired medical school Dean and Professor James Strickler ’50, DMS ’51, who was instrumental in creating the exchange programs, was honored by Jahjaga, who presented him with the Humanitarian Medal of Mother Teresa on Tuesday during her public lecture.

“The president’s visit provided a moment of celebration of the many and varied connections that Dartmouth and Kosovo have had. More important, we were able to identify specific future opportunities for deepening our partnerships in education, medicine, and business,” said Lindsay Whaley, acting associate provost for international affairs and professor of linguistics and classics.

It was strong support from her family—her parents, brother, and her husband—as well as from friends, that helped Jahjaga along her path from police officer to president.

“They are the engine of energy for any person,” Jahjaga said of those close to her, in an interview with Dartmouth Now.

Jahjaga is the fourth person to be elected president of her new nation since it declared independence four years ago. A lawyer, she rose to the position of director of police in 2009, a post she held until her election last April. She said she started in police work as a way to “make change for women.”

Her political ascension was fueled by a “desire to help my own people,” she says. As leader of a new nation, with a young population—70 percent of whom are under the age of 30—the president said her “full energy remains with the youth and with women.” 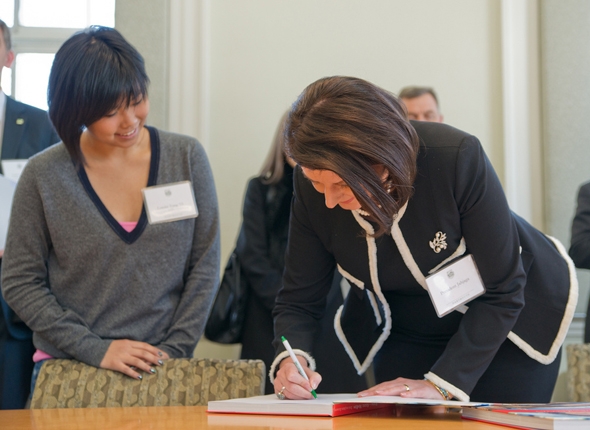 Kosovo President Atifete Jahjaga (right) signs a book she gave to students (including Lorelei Yang ’15, a member of the College’s Inter-Community Council) who attended a reception during her visit to Dartmouth. President Jahjaga also met with students in two government classes that had been studying civil wars, secession, and state creation. (photo by Eli Burak ’00)

She said she is working to improve education and keep educated young adults from leaving Kosovo. Jahjaga hired Dartmouth graduate Gent Salihu ’11 to work in her office soon after Salihu returned to Kosovo last year. Jahjaga said she enjoys being around young people, as they “have passion for what they want to do.”

During her visit, the president spoke to students in two government classes. Jenna Pfeffer ’12, from Merrick, N.Y., outgoing president of the undergraduate Dartmouth Women in Business group, asked Jahjaga about the challenges women face in her country.

“For this question we need a couple of days to sit together and speak,” Jahjaga said, laughing. She said that as soon as she was elected, her appearance was scrutinized.

“I was not looked at in the beginning as a president who has clear goals. They were looking at my hairstyle, my shoes, my bag, things other than looking at what actually has to be done,” she said.

Pfeffer said after class that she was fascinated to hear “about the challenges for women in such a big leadership role.”

Andrew Lim ’14 said the chance to have Jahjaga speak to the class “is the reason I came to Dartmouth—to have opportunities like this.”

“President Jahjaga’s visit was such a tremendous opportunity for our students,” said John Carey, the John Wentworth Professor in the Social Sciences and chair of the Government Department.

“The classes the president attended had spent the last 10 weeks studying the causes and consequences of civil wars, and secession and state creation. Here we had the leader of a post-conflict society, and of a country that just recently declared its own independence, sit down and share her perspective and field questions thoughtfully. That’s really quite remarkable,” Carey said. “Her visit made concrete and tangible a lot of the broad theoretical ideas our students wrestle with in the classroom.”

‘Women as agents of change’

Female faculty members talked with the president about topics including violence against women, access to education for women, and women in government. Jahjaga told them that in her country’s most recent elections, women’s representation in the Kosovo Assembly increased to 35 percent of the 120-seat body.

“My election as a woman head of state shows the willingness of Kosovo society and institutions to enhance and build a state based on true democratic principles,” she said. “Democracy is not full until half of its population is equally represented at all levels of society. I will not stop until this principle is realized.”

The president said she’s planning an international conference next year in Kosovo on “women as agents of change,” and asked faculty members for advice on making the event a success.

History Professor Annelise Orleck welcomed the chance to meet Jahjaga. “We don’t often have that much opportunity to really interact with people who make that much of a difference,” she said. 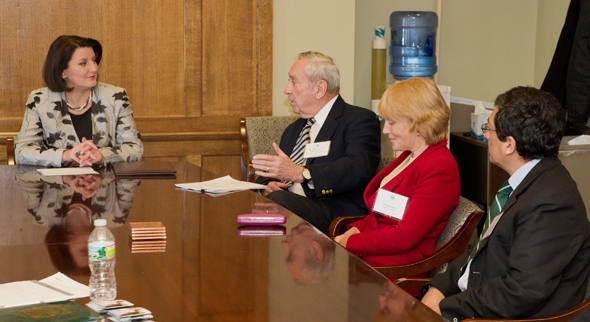 “We have inherited a system that is totally broken,” Jahjaga said. “We are lacking expertise and experience in a few fields of medicine.”

The physicians suggested the president put a priority on primary care initiatives.

“If I were in a position that you might be in of actually influencing the system, I would make it very appealing for medical students to want to go into family medicine. And then there’s a family medical doctor in every village and every town,” said Fay Homan, a family practitioner in Wells River, Vt., and adjunct assistant professor of community and family medicine, who has been involved in Kosovo exchanges. “You actually have better outcomes and a much less expensive system.”

A young country such as Kosovo “has the opportunity to really intelligently redesign the delivery of care,” said Al Mulley, director of The Dartmouth Center for Health Care Delivery Science.

Medical School Dean Wiley “Chip” Souba suggested Jahjaga set as priorities efforts directed at young people including smoking cessation programs, and education on the value of a healthy diet and the role of exercise.

“Those three things alone would go a long way to improving health,” he said.