Award-winning writer Tobias Wolff, author of several short story collections including Our Story Begins and the memoirs This Boy’s Life and In Pharoah’s Army, is in residence at Dartmouth as a Montgomery Fellow this month. 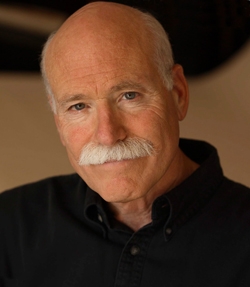 During his weeklong residency, Tobias Wolff will join several English classes and deliver a public lecture entitled, “Luck and Work: A Writer’s Life,” on Tuesday, April 24 at 4:30 p.m. in Filene Auditorium, located in Moore Hall. (photo by Elena Seibert)

Wolff, the Ward W. and Priscilla B. Woods Professor of English at Stanford University, will be on campus from Monday, April 23, to Friday, April 27. He will deliver a public lecture entitled, “Luck and Work: A Writer’s Life,” on Tuesday, April 24, at 4:30 p.m. in Filene Auditorium, located in Moore Hall.

For his short fiction, Wolff has been honored with the Rea Award, the O. Henry Prize, and the Story Prize, while his novella, The Barracks Thief, received the PEN/Faulkner Award in 1985. This Boy’s Life, a memoir of of growing up in Washington State with an abusive stepfather, won the Los Angeles Times Book Prize and was made into a 1989 feature film starring Leonardo DiCaprio. In Pharoah’s Army, a memoir of his service in the Vietnam War as an Army Special Forces lieutenant, was a finalist for the National Book Award.

“Tobias Wolff is acknowledged to be one of the great American postwar short story writers, if not the greatest,” says Richard Stamelman, executive director of the Montgomery Endowment. “His stories have a deceptive naturalness that brings into precise and compressed focus the dramas of ordinary everyday life, thus revealing truths about human relations between children and parents, teachers and students, and young men and women.”

“He is also a gifted teacher of creative writing,” Stamelman continues. “His presence at Dartmouth as a Montgomery Endowment Fellow will give students the opportunity to learn from him about the writing of fiction and memoir, about the pains and pleasures of being a writer, and about the power of literature to change one’s life.”

Established in 1977, Dartmouth’s Kenneth and Harle Montgomery Endowment provides for “the advancement of the academic realm of the College” in ways that enhance the educational experience, in particular that are offered to undergraduate students.