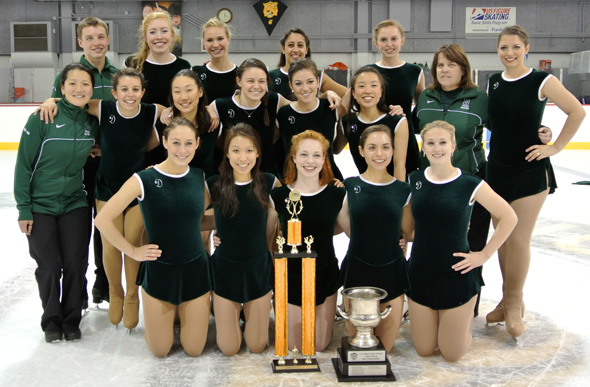 “After finishing second by just 2.5 points last year, I started off the season by stressing to the team that we can win nationals this season. I wasn’t just saying it— I believed it and they came to believe it, too,” said head coach Jacki Smith. Smith ended her four-year Dartmouth coaching career on a high-note; she and her family are soon relocating to the South. 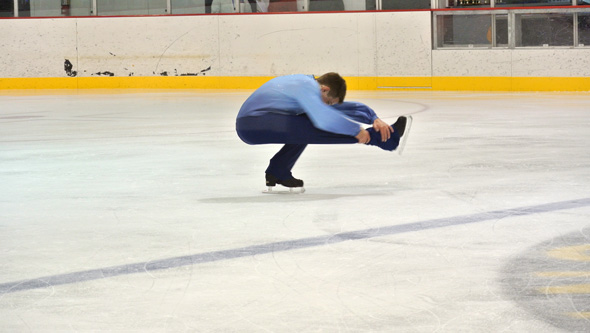 Joseph Miller ’14 was one of the six Dartmouth skaters to win an individual event gold medal at the Intercollegiate Figure Skating Championship. (courtesy of Alina Everett ’12)

“At last year’s nationals, our team members skated amazingly and we were really proud of everyone’s performances,” said Jessiman of Darien, Conn., a religion modified with history major who is also a double minor in government and Spanish. “Knowing our team’s strength and depth, at the beginning of and throughout the season, we asked ourselves how we could further improve, prepare, and empower ourselves to win nationals.”

The national title win was even more meaningful since the team had dedicated its season to the memory of the program’s late coach J. Michael McGean ’49, who passed away in September 2011. McGean and his daughter Loren McGean ’92 coached the team together through 2008, leading the Big Green to five consecutive national championships from 2004 to 2008. Michael McGean and his late wife Lois were inducted into the U.S. Figure Skating Hall of Fame in 1991.

“Coach Mike McGean left an incredible legacy and our skaters are still inspired by the sense of community and passion he brought to the skating team,” said Everett, a psychology major and English minor from McCall, Idaho. “We feel his presence through our alumni who return to competitions every year to cheer on the team, and through the Class of 1949, whose support has made it possible for the team to compete year to year and to thrive the way we have. I was so proud standing on the ice as they announced we had earned the championship title, not just because of our team’s hard work, but also because we were able to honor Coach McGean and the Dartmouth community that has been so supportive of us. It was an emotional moment for the entire team.”

Joseph Miller ’14 of Salt Lake City, Utah, said the team—known for its strong camaraderie and sportsmanship—“completely stepped up to tackle nationals as one unit—a family.”

Miller, a geography major with minors in international studies and Japanese, added, “I would like for people to know that Dartmouth skaters invest so much of our Dartmouth life and our hearts into the team, that being a part of the skating team is a cornerstone experience for each and every one of us. There is a lifetime of work, of practice, pain, and passion that goes into those few minutes of performing in front of crowds and judges. It’s an ongoing joke on the team that figure skating is such a lifestyle, that you either ‘skate or die,’ which has become a catch phrase of the team.”