Around 100 Dartmouth students have cut alcohol consumption by almost half after taking part in a pilot program run by the Learning Collaborative on High-Risk Drinking. 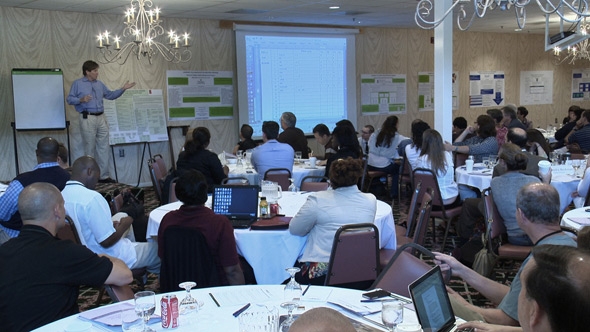 Lloyd Provost, an expert in the science of improvement and senior fellow of the Institute of Healthcare Improvement, talks with college and university teams at a working session of the Learning Collaborative on High-Risk Drinking last summer. (photo courtesy of Dartmouth Media Production Group)

The promising findings of the program, known as BASICS, are the result of evidence-based work by Dartmouth’s team working with the Learning Collaborative, a ground-breaking initiative launched by 32 universities and colleges in 2011 to identify and implement the most effective ways to tackle a problem that affects nearly 4 out of 10 students nationwide. The collaborative is the inaugural effort of the National College Health Improvement Project (NCHIP), created by President Jim Yong Kim to improve student health through the application of population health solutions.

“Reducing binge drinking and its harmful effects is among the highest priorities my colleagues and I are working to address,” says Dean of the College Charlotte Johnson. “The safety and well-being of our students is our utmost concern, and I am very pleased with the discernible results of this innovative work.”

Dartmouth began requiring BASICS (Brief Alcohol Screening and Intervention for College Students) last September for students cited for an alcohol-related offense. Additional students joined the program because they wanted to learn how to cut down on drinking and reduce its negative effects. Data from intervention work with about 100 students who violated the College alcohol policy last fall—many of them needing medical assistance—show that their alcohol consumption has been cut almost in half within 90 days.

Developed in the late 1990s at the University of Washington, BASICS has been shown nationally to reduce drinking and harm from alcohol use among college populations. The program is designed to help students examine their drinking behavior in a judgment-free environment and pairs online self-assessment with an interview with a counselor in the Dean of the College division. Students are invited to participate in BASICS within 72 hours of an alcohol incident and are expected to complete the program within two weeks.

“Dartmouth’s adoption of BASICS is an example of taking an evidence-based approach developed elsewhere and using the improvement model to test it on our campus with our students. Based on our initial results, we are now working to expand this program to other groups, including athletes in the Peak Performance program, and first-year students who are written up for pre-gaming in residence halls,” said Aurora Matzkin ’97, special assistant to the president for student health. “Pre-gaming” is when students consume alcohol before attending a social event.

Because of the initial success of BASICS, the program will be used next term with student athletes on campus for sophomore summer. Dartmouth will soon hire a new staff member who will use BASICS programming with athletes, modeled on successes at other institutions. The program will run in conjunction with Athletics’ Peak Performance program.

Also new for spring term is a pilot project in which undergraduate advisors (UGAs) in Russell Sage residence hall seek out and report underage drinking. Previously, UGAs addressed such behavior after it was reported to them. For the first several weeks of the term, UGAs issued warnings. From the end of April, Russell Sage residents violating the alcohol policy will be required to complete BASICS.

“We have had some remarkable data that indicates our efforts have been well worth it thus far. Next term, we look forward to our expanded use of BASICS,” said Brian Bowden, coordinator of Alcohol and Other Drug Education Programs.