Education innovator Salman Khan said his Khan Academy is always searching for new talent, and the hedge-fund-analyst-turned-digital-pioneer urged a full house in Spaulding Auditorium to send him videos he could consider using on his free, online education site.

“Try and make some content yourself,” said Khan, as he told the story of his online venture and its videos that in two years’ time have attracted almost 6 million unique users and delivered 140 million lessons. “The sky’s the limit.”

“We’re at this inflection point in history,” he concluded, receiving a standing ovation from the crowd. We can be this institution for the world.” 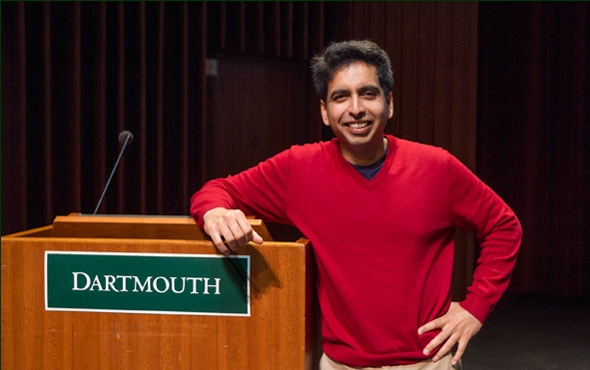 Salman Khan, founder of the Khan Academy, spoke before a full house in Spaulding Auditorium on April 23. His lecture was part of the “Leading Voices in Higher Education” series. (photo by Eli Burak ’00)

In introducing Khan, Dartmouth Provost Carol Folt said, “Sal’s beautiful idea of a free, world-class education for anyone anywhere has reached across the world to engage millions of people, new learners, and has challenged even the most venerable institutions to think bigger, to think about teaching in new ways, to experiment with their teaching in order to improve, and to strive to a completely new gold standard for education.”

“Khan Academy’s success has been electrifying,” she said.

Khan, who on April 18 was named one of the 100 most influential people in the world by Time magazine, started putting together online math lessons in his spare time in 2004, tutoring first one cousin, then many others.

“I became something of a tiger cousin,” he joked.

Khan’s speech was part of the “Leading Voices in Higher Education” series, in Dartmouth’s strategic planning process, which began last summer. The next speaker is former Princeton University Dean Nancy Weiss Malkiel, on Tuesday, May 1, at 4:30 p.m., in Carson Hall room L01. Malkiel spent 23 years as dean of the college at Princeton—the school’s longest-tenured person in that position.

Khan’s pitch excited many in the crowd, including Laura Coyle ’12. The Dartmouth senior is headed to medical school next year but said Khan’s talk has her reconsidering her future.

“It made me want to decide to defer for a year and work for him,” she said.