Two researchers at the Geisel School of Medicine at Dartmouth have helped to identify switches that can turn on or off genes associated with colorectal cancer. The finding offers clues about the development of colorectal cancer and could—potentially—provide targets for new therapies. Jason Moore, Third Century Professor of genetics and the director of the Institute for Quantitative Biomedical Sciences, and Richard Cowper-Sal.lari, a graduate student in Moore’s lab, were part of a team that included researchers from Case Western Reserve University and the Cleveland Clinic. The team published its findings in Science Express, the online prepublication site for the journal Science, on April 12. 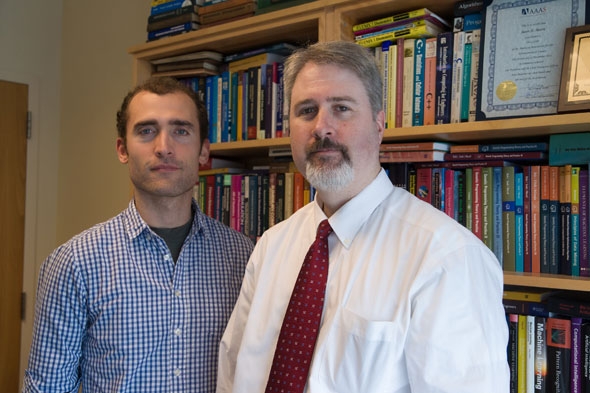 Jason Moore (right), a professor of genetics and of community and family medicine at the Geisel School of Medicine at Dartmouth, and Richard Cowper-Sal.lari, a graduate student in Moore’s lab, were part of a team that has identified switches capable of turning on or off genes associated with colorectal cancer. (photo by Eli Burak ’00)

Many studies of cancer and other diseases have looked for genetic variations that lead to disease. But for this study, Moore, Cowper-Sal.lari, and their colleagues examined sections of DNA that do not code for proteins—sections that have sometimes been referred to as “junk” DNA. Long overlooked, junk DNA has gained more attention of late as it has become clear that it can regulate the expression of genes.

“We’re now starting to assign function to what historically has been known as the junk DNA—stuff in between genes that we weren’t really sure what it did, if it did anything at all,” Moore says. Proteins that bind to noncoding sections far away from a gene, Moore explains, can help turn that gene on or off.

The researchers looked at specific sections of noncoding DNA in nine colorectal cancer samples and three samples of healthy colon tissue. They found patterns in the sections of noncoding DNA that differed depending on whether the tissue was cancerous or healthy. They refer to these sections as variant enhancer loci (VELs). Cowper-Sal.lari says that the patterns they found are more reliable indicators of the presence of colorectal cancer than any currently known patterns of gene expression. “You get a very crisp signal,” he says. The tumor samples were taken from patients at various stages of disease, adding to the strength of the finding.

Moore, who is also the associate director for bioinformatics at the Norris Cotton Cancer Center, adds that what he and Cowper-Sal.lari added to the study was their ability to make sense of mountains of data by developing computer programs and algorithms.

“It’s an exciting time in cancer research because we can now sequence entire human genomes and measure the genome on a massive scale, but what’s lagging behind are the computational methods—the software, the algorithms, the statistical approaches—to allow us to make sense of this vast amount of information,” Moore says. “The DNA sequencing technology to generate the data is moving a lot faster than the computational methods for making sense of it.”

Cowper-Sal.lari adds that the intense computation required to do the analysis was only possible because of access to Discovery—Dartmouth’s supercomputing cluster.

There are a number of directions the research could go in the future. Cowper-Sal.lari says that if they are able to look at additional samples and find the same patterns, then “the genes that are the targets of these VELs are going to be really good potential therapeutic targets for colorectal cancer.”

“That’s the ultimate goal—to develop drugs,” Moore says. “If we can understand the biology of how these genes are turned on and off in cancer, then we can develop drugs to target them and turn them on or off.”