Jim Yong Kim Named Next President of the World Bank 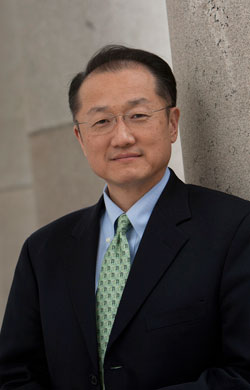 Steve Mandel ’78, chair of Dartmouth’s Board of Trustees, said, “The Board is proud to congratulate President Jim Yong Kim on the great honor of being elected president of the World Bank. Jim has been an inspiring and innovative leader, and we have no doubt that he will bring the same energy and creativity to the World Bank that he brought to Dartmouth.”

He continued, “Today is Jim’s day, a day for all of us to celebrate his exciting new opportunity. He remains president of Dartmouth through June 30, after which an interim president will take office. The Trustees plan to announce the interim president tomorrow, Tuesday, April 17.”

For the first time in the World Bank’s history, the presidential selection process yielded multiple nominees, reported the World Bank in today’s announcement.

“This process included an open nomination where any national of the Bank’s membership could be proposed by any Executive Director or Governor,” said the announcement.

In its statement, the World Bank officials expressed their “deep appreciation to all the nominees, Jim Yong Kim, José Antonio Ocampo and Ngozi Okonjo-Iweala. Their candidacies enriched the discussion of the role of the President and of the World Bank Group’s future direction. The final nominees received support from different member countries, which reflected the high caliber of the candidates. We all look forward to working with Dr. Kim when he assumes his responsibilities.”