It was a total team effort that helped the Big Green capture the title on April 15, according to Dave Seliger ’12, who co-captains the team along with Edward Talmage ’12. In the individual championships, Stuart Ghafoor ’14 (Foil B-strip) took eighth place, Adam Omar ’15 (Epee A-strip) finished sixth, while Tianchi Xu ’12 (Foil A-Strip) and Tommy McQuillan ’13 (Sabre A-strip) were also promoted to the individual round.

“I think the reason we won is that every single member of our team contributed in some meaningful way with their performance,” says Seliger, an engineering modified by studio art major from Winchester, Mass. “If there were any weak links, we just simply would not have won.”

Previously, the highest the team had placed was tenth, in 2007; last year they finished 23rd. Seliger says that half the team joins with previous experience either from high school or United States Fencing Association competition, while the other half of the team learns to fence at Dartmouth.

“People are often surprised to discover that Dartmouth does not have a fencing coach and is a completely student-run team,” adds Seliger. “I believe that our win speaks to the passion and dedication of all of our fencers.” 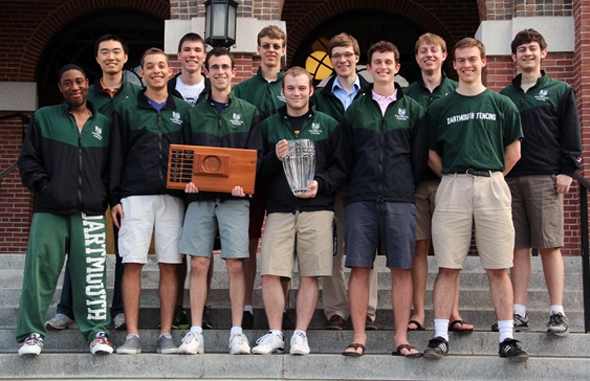 Director of Club Sports Joann Brislin, who oversees Dartmouth’s 33 club sports, agrees. “This year’s student leadership raised the bar again for the fencing team. They set up a training camp themselves over winter break and worked with top coaches and some of the country’s top fencers. This is a reflection of their dedication, and helped take the team to another level. They had a very successful season, and also won the New England Championships prior to Nationals.”