For the first time in the 38-year history of the Ivy League Men’s Golf Championship, the team champion had to be decided in a playoff on Sunday. On the third playoff hole, the University of Pennsylvania ultimately edged Dartmouth for the Ivy League title. But Dartmouth senior Peter Williamson earned the individual championship, winning his second consecutive Ivy title and the third of his career. 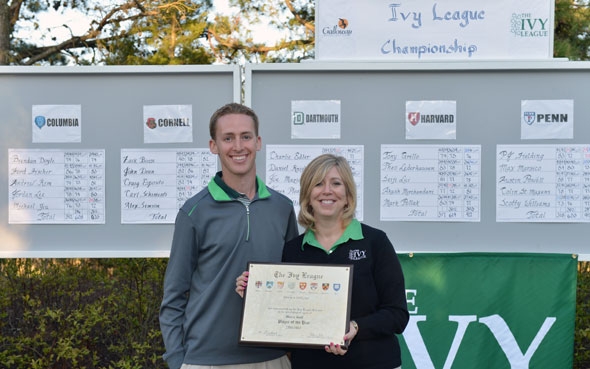 Peter Williamson (left) ’12 won his third Ivy League individual golf title on April 29. He is only the second player in the league’s history to win three titles. (Courtesy of the Ivy League)

There was really never any doubt during Sunday’s round that Williamson would finish in the top spot. He entered the day with a 7-stroke advantage, and shot even-par on the par-71 6,606-yard course in the third round to secure the victory by eight shots.

The Hanover, N.H. native’s third individual Ivy title made him only the second player in Ivy League history to win three. He also earned first-team All-Ivy honors, which marked the fourth time he was named All-Ivy. Williamson joins Lee Birchall ’02 as the only Dartmouth golfers to earn four All-Ivy honors.

By a unanimous vote of the coaches, Williamson was also named the conference’s Player of the Year. It marked the third time he garnered the honor, after receiving the recognition in 2009 and 2011.

The Big Green were looking to claim their first championship since 1983, but did have their highest finish since taking second in 1995.