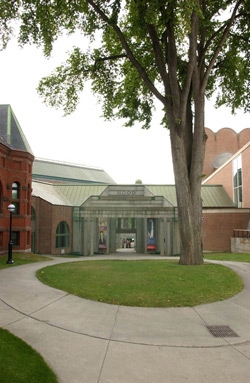 The Hood Museum of Art, pictured as it stands today, opened in 1985. The expanded museum facility will create new exhibition, educational, office, and public spaces in support of the Hood’s mission as a teaching museum. (photo by Joseph Mehling ’69)

Dartmouth today announced that it has selected Tod Williams Billie Tsien Architects to design a major expansion and renovation of its Hood Museum of Art. Since the museum opened in 1985, its collection and programming have grown exponentially, and it has become a vital educational resource for Dartmouth students and faculty across a range of disciplines, and for visitors from around the world. The goal of the project, which encompasses the renovation of the adjacent Wilson Hall and an addition to the 1985 Hood Museum of Art building, is to significantly increase the museum’s gallery space and classrooms, and feature new entrance facilities and amenities. The Hood’s expansion and renovation is an integral component of the creation of Dartmouth’s new Arts District, encompassing the neighboring Hopkins Center for the Arts and the new Black Family Visual Arts Center, designed by Machado and Silvetti and opening in September 2012. Dartmouth has also initiated a renovation and expansion project for the Hopkins Center and will be selecting an architect in the coming year.

Dartmouth began expansion planning for the Hood in 2010 in response to the continued growth of the museum’s role on campus, which encompasses its collections, exhibitions, programs, and teaching activity. Dartmouth’s collection—which dates back to 1772, three years after the College was founded—is among the oldest and largest of its kind in the United States. Since the Hood opened, the collection has increased from approximately 47,000 works to more than 70,000 today, which extend across a broad spectrum of cultures and historical periods. The collection highlights include important holdings of Native American, African, and Melanesian art, as well as European and American prints, paintings, and sculpture, and modern and contemporary art, including a significant collection of Aboriginal Australian paintings from the past three decades. First conceived without a formal education department, the museum today organizes more than 150 programs for college, public, and regional school audiences and mounts approximately 15 exhibitions each year, including the Space for Dialogue exhibition series, curated by Dartmouth students who are mentored by the museum’s professional staff. 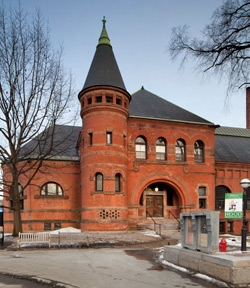 The project will include the renovation of Wilson Hall. Dartmouth began expansion planning for the Hood in 2010, in response to the continued growth of the museum’s role on campus. (photo by Jonathan Benoit)

“The Hood Museum of Art adds a critical dimension to scholarship and research by students and faculty in the arts, and spurs creativity in the work of every department and discipline at Dartmouth,” said President Jim Yong Kim. “Tod Williams and Billie Tsien, whose buildings so well reflect the mission of the organizations for which they are created, are the perfect partners as we look to expand and enhance the Hood’s presence, both nationally and internationally.”

“The Hood Museum is a dynamic educational and cultural resource on our campus,” added Dartmouth Provost Carol L. Folt. “It plays a vital role in both curricular and extracurricular activities at Dartmouth, and with an expanded facility, including a new museum learning center, it will offer our students transformative and interdisciplinary engagement with original works of art in state-of-the-art galleries and classrooms equipped with smart technology.”

“Tod Williams and Billie Tsien presented us with an inspired design proposal that dovetailed beautifully with our desire to reimagine and transform the Hood Museum of Art through this expansion project. With new spaces to facilitate the exploration of the Hood’s global collections, we will enhance our capacity to engage all of our audiences with art of diverse cultures and historic periods,” said Taylor. “Tod and Billie’s track record in creating architectural spaces that invoke learning and interaction was a strong factor in our decision criteria. We look forward to our collaboration with them in the creation of an ideal learning environment that will make the Hood a model teaching museum for the twenty-first century.”

Founded in 1986 and based in New York City, Tod Williams Billie Tsien Architects has a longstanding engagement with the arts, from designing artist studios and exhibitions to completing a wide range of museum projects, including a renovation and two additions to the Phoenix Museum of Art (1996 and 2006), a new building for the American Folk Art Museum (2001), and a satellite gallery for the Whitney Museum of Art (1988). Their current project is a new building for the Barnes Foundation in Philadelphia, which will open in May of this year. Equally committed to education, Tod Williams and Billie Tsien have worked with colleges and universities throughout the United States to create architectural responses to the current campus fabric and invite dialogue among students and faculty at institutions including Princeton University, Johns Hopkins University, the University of Virginia, the University of Pennsylvania, the University of California at Berkeley, Bennington College, and the University of Chicago. The firm has been repeatedly honored for their work by The American Institute of Architects.

The conceptual vision for the new Hood Museum of Art responds directly to the museum’s mission and role on Dartmouth’s campus, and it will be developed and refined into a design plan over the next year by Tod Williams Billie Tsien Architects in conjunction with Hood leadership. The vision is grounded in the shared beliefs that the architectural environment should allow viewers from all backgrounds and disciplines to engage in intimate and direct experiences with the art on view; that the museum’s strong connection to the community and campus should remain apparent in its architectural design; and that the relationship among the buildings in the Arts District and the surrounding landscape is critical to a positive campus life.

The expanded museum facility will create new exhibition, educational, office, and public spaces in support of the Hood’s mission as a teaching museum. New galleries will incorporate display spaces for African art, Aboriginal Australian art, modern and contemporary art, Native American art, and works on paper, none of which are on view at present due to space limitations.