Andrew Zureick ’13, a chemistry major from Bloomfield Hills, Mich., and Marissa Lynn ’13, a biology major with a concentration in biochemistry from Bow, N.H., have been named 2012 Goldwater Scholars. The Barry M. Goldwater Scholarship and Excellence in Education Program, established by Congress in 1986, seeks to provide the United States with a continuing source of highly qualified scientists, mathematicians, and engineers by supporting college students who intend to pursue careers in these fields. The scholarships will cover the cost of tuition, fees, books, and room and board up to a maximum of $7,500 per year. 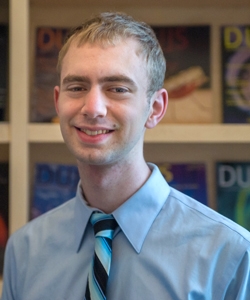 Andrew Zureick ’13, a chemistry major who plans to pursue chemical research relevant to medicine, health, and pharmaceutical development, has been named a 2012 Goldwater Scholar. (photo by Eli Burak ’00)

Zureick and Lynn are two of 282 sophomores and juniors selected on the basis of academic merit from a field of 1,123 mathematics, science, and engineering students who were nominated by the faculties of colleges and universities nationwide. Assistant Dean for Scholarship Advising Kristin O’Rourke notes that the Goldwater Scholarship recognizes the most promising young scientists and researchers across the country. “The fact that two of them are from Dartmouth highlights how outstanding our student scientists are.”

Following his graduation from Dartmouth, Zureick plans to attend medical school and to pursue research in organic chemistry.

“I entered Dartmouth with a broad interest in the health sciences,” says Zureick, “but after taking organic chemistry, I found myself fascinated by molecular interactions. At the same time, Dartmouth professors have helped me understand the pathophysiology of many diseases. My work in several labs—including an internship at the National Institutes of Health (NIH)—has guided my interests in this direction, and I really value the great foundation and skill set I have built as a Dartmouth undergraduate.”

“Winning the Goldwater Scholarship is a huge honor,” he continues. “Professionally, I intend to pursue chemistry research relevant to medicine, health, and pharmaceutical development. An MD will give me an essential understanding of diseases and their effects on patients.”

As a James O. Freedman Presidential Scholar at Dartmouth, Zureick has been a part of the lab of David Glueck, professor of chemistry. Zureick, who will being presenting research on asymmetric catalysis at the 244th American Chemical Society National Meeting this August, attributes his passion for research to Glueck’s mentoring.

Zureick has served as president and former editor-in-chief of the Dartmouth Undergraduate Journal of Science, and recently founded an undergraduate chapter of the American Chemical Society at Dartmouth. “I also love the opportunity to share my academic interests with other students,” he says, “and have done so as a study group leader and tutor through the Academic Skills Center, and as a lab TA for several chemistry courses.” 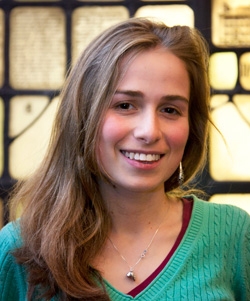 Marissa Lynn ’13, a biology major with a concentration in biochemistry who plans a career in medical research, has been named a 2012 Goldwater Scholar. (photo by Joseph Mehling ’69)

Lynn was previously recognized with an honorable mention in the 2011 Goldwater awards. After Dartmouth, she intends to pursue an MD-PhD in microbiology and immunology, in order to conduct medically relevant research in disease pathogenesis. “I hope to tailor my work to benefit under-served populations in developing nations,” she says. “I want my work to combine meticulous scientific research, improvements in public health, and cultural exchange. Along with bench research, I am interested in pursuing a teaching position at the university level.”

“It’s a great honor to be recognized by the Goldwater Foundation,” Lynn says, thanking mentor Professor Mark Spaller and the other Dartmouth faculty with whom she has studied. Lynn has been a part of the research group of Geisel School of Medicine Associate Professor of Pharmacology and Toxicology Mark Spaller since the beginning of 2010, taking part in the lab’s studies of the cellular behavior of biologically active molecules. “I also credit the Women in Science Project (WISP)for allowing me to get involved with lab research my freshman year,” she says.

Under Spaller’s direction, Lynn intends to continue research which would “compare the binding properties of three related but distinct PDZ domain proteins. The long term goal of my project is to find a selective inhibitor for PDZ domains. Uncontrolled activity of this domain has been implicated in the pathogenesis of pancreatic cancer.”

Lynn is currently studying abroad as part of Dartmouth’s foreign study program (FSP) in Fez, Morocco, sponsored by the Asian and Middle Eastern Studies program at Dartmouth. From September through November 2011, Lynn worked in Nepal, on a fellowship from Dartmouth’s John Sloan Dickey Center for International Understanding. She recalls, “I spent my time in Salleri, a remote Himalayan village, teaching English in a primary school. It makes me extremely sad to think that my Nepalese students were at risk of contracting preventable childhood diseases because there was no way to keep vaccines refrigerated during transportation.” She continues, “I also dream of one day returning with a case full of refrigerator free, injection free, single dose vaccines. It is my goal to prevent outbreaks of horrific childhood diseases in the village high amongst the clouds which I miss dearly and will never forget.”