White Dwarf Stellar Neighbors are Among the Oldest in the Universe

Dartmouth astronomer John Thorstensen is part of a team that has found two white dwarf stars that are considered the oldest and closest known of these stellar objects. A white dwarf is what stars like the Sun become after they have exhausted their nuclear fuel. In about 5 billion years, the Sun also will burn out and turn into a white dwarf star. 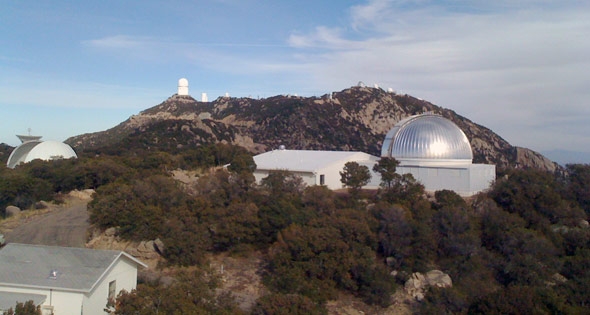 The MDM Observatory’s Hiltner 2.4-meter telescope was used in measuring the distance of the white dwarf star in Ursa Major by tracking the star’s motion. (photo provided by Ohio University)

These two stars, between 11 and 12 billion years old, are 100 light years away from the Earth in the constellations Taurus and Ursa Major. Their importance lies in the fact that they are the closest known examples of the oldest stars in the Universe, having formed soon after the Big Bang, which is estimated to have occurred 13.7 billion years ago. A paper detailing the discovery is appears in the Monthly Notices of the Royal Astronomical Society.

Thorstensen, an optical observational astronomer and professor of physics and astronomy at Dartmouth since 1980, employs the telescopes of Arizona’s MDM Observatory in his work. 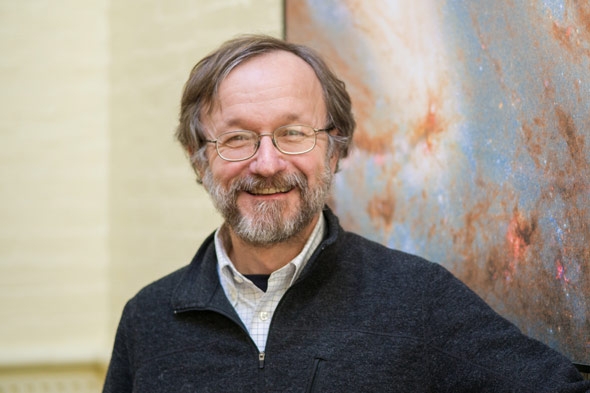 Dartmouth astronomer John Thorstensen specializes in observations of cataclysmic binary stars (systems with a white dwarf and a normal star companion) and distance measurements to nearby stars. (photo by Eli Burak ’00)

“My contribution to this project was to measure an accurate distance to one of the stars by measuring its parallax—the tiny position shift caused by the earth’s orbit around the sun.  This is the oldest way of finding the distances to stars, but it’s still the most reliable,” Thorstensen says.

He continues, ”Measuring distances this way requires years of patient data collection, and having our own telescope [the MDM] makes this much more practical than it would be at a national observatory. At MDM, observers run the telescope on their own, so it is also a wonderful facility for training students hands-on."