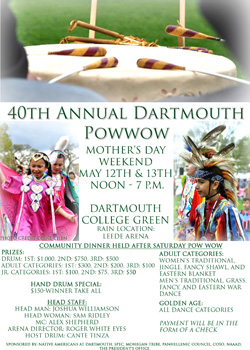 The 40th Annual Dartmouth Pow-Wow will be held May 12 and 13 on the Green. The Pow-Wow honors and celebrates Native culture through traditional dancing, singing, prayer, arts, and food. (photo courtesy of Native Americans at Dartmouth)

“Pow-Wow is a spiritual and celebratory way of expressing Native culture and heritage,” says Autumn White Eyes ’14, co-president of the 40th Annual Dartmouth Pow-Wow, being held May 12 and 13 on the Dartmouth Green.

The Pow-Wow—hosted by the Native Americans at Dartmouth (NAD) student organization—honors and celebrates Native culture through traditional dancing, singing, prayer, arts, and food. “I’ve been participating in powwows since I was born,” says Christina Goodson ’14, who also serves as co-president of the Dartmouth Pow-Wow. “It is very much a part of who I am and it brings me great joy to be able to share this with the Dartmouth community.”

The first Dartmouth Pow-Wow was held in 1973, during the presidency of John G. Kemeny, who rededicated the College to its historic mission of educating Native students. In recognition of his commitment to Dartmouth’s Native American students, this year’s Pow-Wow will include a tribute to the late President Kemeny.

In addition to celebrating the College’s 40th Pow-Wow this year, Dartmouth’s Native American Program (NAP) is also marking its 40th anniversary. Special events will be held throughout the year to recognize this milestone. Provost Carol Folt will speak at the kick-off event for invited Native American students, alumni, and faculty on Friday, May 11. That afternoon also marks the start of a special Native American Alumni Association of Dartmouth reunion weekend in honor of the 40th Pow-Wow.

The founding of Dartmouth’s Native American Program in 1972 was spearheaded by President John Kemeny to rededicate the College to its historic mission of educating Native students. Under the directorship of Molly Springer, NAP is regarded as a model collegiate program that mentors Native students, develops their leadership skills, and empowers them to address the social, political, and economic needs of Native peoples. Dartmouth has 885 Native American graduates, more than all the other Ivy League institutions combined, and there are currently 185 Native American students at the College.

Preparation for the 40thAnnual Dartmouth Pow-Wow began during the fall term. The event is organized by the students of NAD, who serve on a variety of planning committees. “We meet every week and spend a large amount of our free time working on making sure that Pow-Wow runs smoothly,” says Goodson.

This event is free and open to the public, and is sponsored by Native Americans at Dartmouth, the Special Programs and Events Committee, the President’s Office, the Council on Student Organizations, the Native American Alumni Association of Dartmouth, the Mohegan Tribe, and the Panhellenic Council.