Fifty years ago, the doors of Dartmouth’s present-day Aquinas House Catholic Student Center, located at the end of Webster Avenue on Occom Ridge, opened for the first time. The doors have remained that way 24 hours a day, seven days a week, ever since. 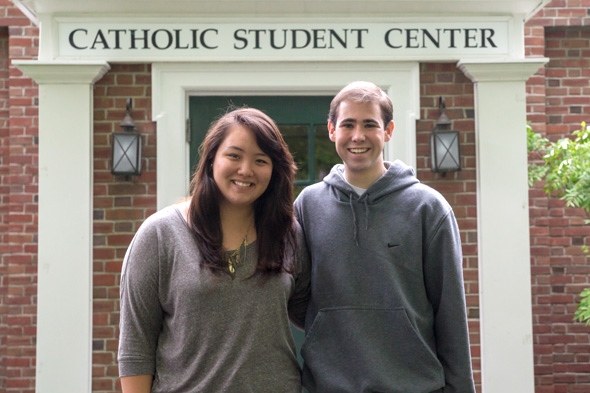 “Our doors are, quite literally, always open, and I believe that the Dartmouth community knows that,” says Patricia Nicholls ’12, who currently works as an intern at the Aquinas House.

In honor of the 50thanniversary of the dedication of the Aquinas House and St. Clement Chapel, the Aquinas House community participated in a traditional eight-day Golden Jubilee celebration earlier this month.

Father Jonathan Kalisch, “Fr. Jon,” who has served as the Aquinas House chaplain since 2009, explained that the celebration recognized not only the physical space of the Aquinas House, but also the spiritual impact that it has had on Dartmouth students over the past 50 years. Many alumni returned to Hanover to celebrate the Jubilee. For many of them, Fr. Jon explains, “walking through those doors changed and transformed their lives.”

Founded in 1953, the Aquinas House, also known as AQ—named in honor of St. Thomas Aquinas, the patron saint of students—was originally located in a house on Choate Road. The Aquinas House community eventually outgrew its original space, and moved to its present-day location in April 1962. The adjoining St. Clement Chapel opened at the same time.

When Rick Mahoney ’65 arrived on campus in the fall of 1961, the Aquinas House was still located on Choate Road. Mahoney experienced first-hand the impact of the Aquinas House’s new facilities. “The new AQ enabled Dartmouth students, and others, to attend Sunday Mass on campus for the first time,” he explains. “This enriched the Sunday services for students, because now the sermons and all the programs could be directed completely at us.”

The late Monsignor William Nolan, known affectionately as Fr. Bill, was the founder and first director of the Aquinas House, a position he held until 1987. “Having Fr. Bill Nolan as our pastor at AQ made it even more enriching,” says Mahoney. “Fr. Bill was a saintly, but very down-to-earth, man, and he understood very well the young men with whom he came in contact, and how challenging their individual faith journeys could be. He is, to my mind, one of the great men of Dartmouth of the 20th century.”

Father John McHugh succeeded Fr. Bill and was the director of the Aquinas House until 2002. “Fr. McHugh brought to AQ his own style and worthiness that served Dartmouth undergraduates for nearly two decades,” says Mahoney. “He has the same place in the hearts of Dartmouth men and women from the ’80s and ’90s that Father Bill had in the hearts of their predecessors. AQ has been twice blessed in terms of special priests who had long tenures at the center.”

While the Aquinas House and St. Clement Chapel have served as a center for prayer and worship for the Dartmouth Catholic community for the past 50 years, the breadth of the center’s impact has reached far beyond the walls of the building.

“It has always been a place students call home,” says Fr. Jon.

“Aquinas House for me has been unmistakably transformative of my Dartmouth experience, says Nicholls, a psychology and Asian and Middle Eastern studies major, from Dallas, Texas. “College seems to me a time when young people are looking for the truths in their lives, and AQ has offered me that and much more.”

“I think AQ is what you make of it,” says Robert Smith ’14, a government major with a minor in music, and an intern at the Aquinas House. “For some, it is simply a church to attend on Sundays. For others, it is a home away from home. The beauty of this center is that both types of people are welcome.”

Smith, a Lower Gwynedd, Pa. native, adds, “It is more than just a hangout spot. My involvement here has helped me to develop spiritually, ethically, intellectually, and socially.”

The doors of the Aquinas House are open to both Catholics and non-Catholics alike.

“All of our events are open to anyone on campus, and I’ve seen many students at AQ who I haven’t met yet hanging out with a friend in the game room, studying in the library, or making snacks in the kitchen,” says Nicholls.

“The aspect of Aquinas House that I enjoy the most is the people,” Nicholls continues. “I am constantly encouraged, challenged, and astounded by the people I am surrounded by. And first and foremost, I am loved and accepted and welcomed—something that I hope the Aquinas House portrays and can continue to spread for another 50-plus years.”