Dartmouth bid farewell to the Class of 2012 with Commencement ceremonies on Sunday, June 10, the culmination of a full weekend of events. Wendy Kopp, founder and chief executive officer of Teach For America, gave the Commencement address. Find more information about the 2012 Commencement at the official website. 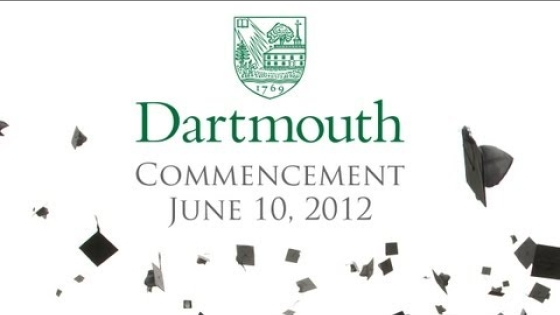 It was a day of pomp and circumstance as nearly 1,800 new graduates bid farewell to Dartmouth in front of a crowd of 12,000 people.

Following Commencement ceremonies, Teach For America (TFA) Founder Wendy Kopp, Provost Carol Folt, and Board Chair Stephen Mandel ’78 hosted a reception for the 37 members of the Class of 2012 joining TFA this year. As teachers, Kopp said, “You’re going to walk the line between confidence and humility.”

Four members of the Class of 2012 who completed their Dartmouth courses with a grade point average of 4.0 were honored as valedictorians at Commencement.

Dartmouth Now profiles members of the Class of 2012

As the Class of 2012 takes its leave, Dartmouth Now profiles some of the College’s newest graduates, including future scientists, educators, and sociologists.

The manager of conferences and events is constantly on the go, coordinating the details for two of the College’s largest events—Commencement and Reunions.