Dartmouth Researchers Are Learning How Exercise Affects the Brain

Exercise clears the mind. It gets the blood pumping and more oxygen is delivered to the brain. This is familiar territory, but Dartmouth’s David Bucci thinks there is much more going on. 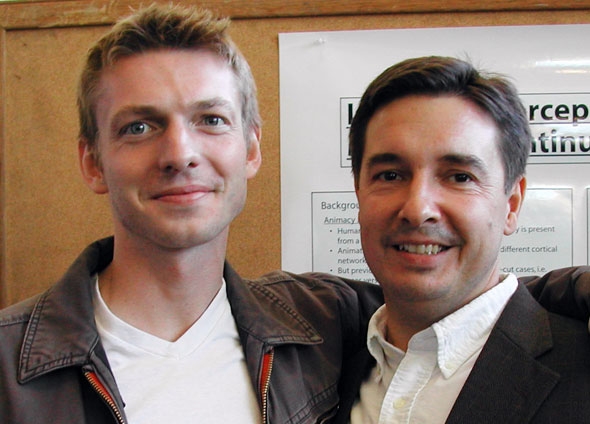 As a graduate student working with Associate Professor of Psychological and Brain Sciences David Bucci (right), Michael Hopkins took the lead in conducting much of the experimental studies on the connection of exercise to learning and memory. (photo courtesy of David Bucci)

“In the last several years there have been data suggesting that neurobiological changes are happening—[there are] very brain-specific mechanisms at work here,” says Bucci, an associate professor in the Department of Psychological and Brain Sciences.

From his studies, Bucci and his collaborators have revealed important new findings:

Bucci began his pursuit of the link between exercise and memory with attention deficit hyperactivity disorder (ADHD), one of the most common childhood psychological disorders. Bucci is concerned that the treatment of choice seems to be medication.

“The notion of pumping children full of psycho-stimulants at an early age is troublesome,” Bucci cautions. “We frankly don’t know the long-term effects of administering drugs at an early age—drugs that affect the brain—so looking for alternative therapies is clearly important.”

Anecdotal evidence from colleagues at the University of Vermont started Bucci down the track of ADHD. Based on observations of ADHD children in Vermont summer camps, athletes or team sports players were found to respond better to behavioral interventions than more sedentary children. While systematic empirical data is lacking, this association of exercise with a reduction of characteristic ADHD behaviors was persuasive enough for Bucci.

Coupled with his interest in learning and memory and their underlying brain functions, Bucci and teams of graduate and undergraduate students embarked upon a project of scientific inquiry, investigating the potential connection between exercise and brain function. They published papers documenting their results, with the most recent now available in the online version of the journal Neuroscience.

Bucci is quick to point out that “the teams of both graduate and undergraduates are responsible for all this work, certainly not just me.” Michael Hopkins, a graduate student at the time, is first author on the papers.

Early on, laboratory rats that exhibit ADHD-like behavior demonstrated that exercise was able to reduce the extent of these behaviors. The researchers also found that exercise was more beneficial for female rats than males, similar to how it differentially affects male and female children with ADHD.

Moving forward, they investigated a mechanism through which exercise seems to improve learning and memory. This is “brain derived neurotrophic factor” (BDNF) and it is involved in growth of the developing brain. The degree of BDNF expression in exercising rats correlated positively with improved memory, and exercising as an adolescent had longer lasting effects compared to the same duration of exercise, but done as an adult.

“The implication is that exercising during development, as your brain is growing, is changing the brain in concert with normal developmental changes, resulting in your having more permanent wiring of the brain in support of things like learning and memory,” says Bucci. “It seems important to [exercise] early in life.”

Bucci’s latest paper was a move to take the studies of exercise and memory in rats and apply them to humans. The subjects in this new study were Dartmouth undergraduates and individuals recruited from the Hanover community.

Bucci says that, “the really interesting finding was that, depending on the person’s genotype for that trophic factor [BDNF], they either did or did not reap the benefits of exercise on learning and memory. This could mean that you may be able to predict which ADHD child, if we genotype them and look at their DNA, would respond to exercise as a treatment and which ones wouldn’t.”

Bucci concludes that the notion that exercise is good for health including mental health is not a huge surprise. “The interesting question in terms of mental health and cognitive function is how exercise affects mental function and the brain.” This is the question Bucci, his colleagues, and students continue to pursue.