After earning the automatic bid to the NCAA Women’s Lacrosse Championship with a victory over the University of Pennsylvania in the Ivy League Tournament final in Philadelphia on May 6, Dartmouth will next square off against host Syracuse, the NCAA tourney’s fourth-seed, on Sunday, May 13, at 4 p.m. This marks the second straight year the Big Green has qualified for the national tournament, and it also mark the team’s 13th appearance in the NCAA tourney under 20-year head coach Amy Patton. 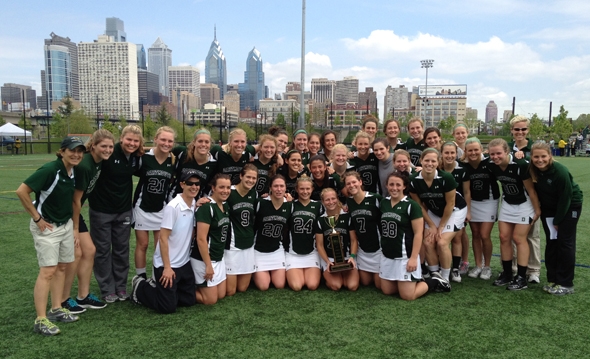 Dartmouth earned an automatic bid to the NCAA Women’s Lacrosse Championship by winning the Ivy League Tournament on May 6. (photo courtesy of Dartmouth women’s lacrosse)

In the Ivy League tournament, Dartmouth trailed Penn 3-1 at halftime, but battled back to beat the top-seeded Quakers 6-4. This was Dartmouth’s first Ivy League Tournament title since the tournament’s inception in 2010, and it was the first time since 2005 that the Big Green had beaten the Quakers on their home field, Dunning-Cohen Champions Field at Penn Park.

“I feel that the success of this year’s team is due to their persistence, belief, and loyalty to one another,” says Patton, whose teams reached the NCAA semifinal in 2005 and the final in 2006. “They have worked incredibly hard all year with a determination to get better each day. When you watch us play the sideline group is just as much a part of the game as those on the field and that says a lot about our chemistry and genuine caring for our team success. It is never about individual play but more about everyone preparing each other on daily basis to make practices challenging so that when we hit the games everyone feels confident and prepared.” 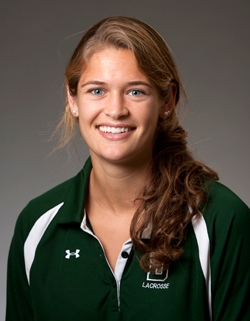 Sarah Plumb ’12 was named the 2012 Ivy League Player of the Year, and finished the Ivy League season with 48 points on 36 goals and 12 assists. (photo by Mark Washburn)

In addition to an Ivy League Tournament title and NCAA berth, this year’s team has much to celebrate. Co-captain Sarah Plumb ’12 was named the 2012 Ivy League Player of the Year, and finished the Ivy League tournament season with 48 points on 36 goals and 12 assists. She also ranked first on the team in caused turnovers (16), draw controls (81), and game-winning goals (3). Plumb’s 81 draw controls this year set a new Dartmouth and Ivy League mark, and eclipsing the previous Big Green record of 53 and conference mark of 67 set in 1995. Plumb will go down as the most dominant player in Ivy League history in terms of draw controls as she now owns both the career mark (155) and single-season figure (81).

Plumb, who follows in the footsteps of last year’s Ivy League Player of the Year Kat Collins ’11, says she is proud to be recognized by the league, but even prouder of the team’s accomplishments. “I know that I would not have been able to get to where I am today without my teammates,” says the government major from Wellesley, Mass. “And being able to win the Ivy tournament this year was a really special feeling. For the senior class, it is really cool to have done something that no other Dartmouth team has been able to accomplish, and it feels great knowing that we were able to leave our mark on this program.”

Patton says of her star midfielder, who was featured on the Athletic Department’s website last month, “Plumb has been such a role model for this program. She is incredibly talented, caring, humble, and truly plays for the love of the game. She enjoys playing because of the relationships with her teammates. When it comes to awards, Sarah would much rather talk about her teammates instead of herself. She has been a rock for our team all year and I know she will leave behind a legacy that many of her young teammates will try to emulate in their playing careers.”

As Dartmouth prepares to tangle with Syracuse for the second time this season, after falling to the Orangewomen 22-4 on April 9, they have high hopes that the result in the Carrier Dome will be different this time. After all, the Big Green lead the all-time series with Syracuse, having won eight of the 14 games played.

“Heading into this weekend, I think that the team is really excited to get a little bit of redemption for our loss earlier this year to Syracuse,” says Plumb. “We didn’t play a very good game last time out against them and we know now that we really need to be on to beat a good team. Everyone is extremely fired up to prove to Syracuse and to ourselves that we are a much better team now then we were a few weeks ago.”

The winner of the Dartmouth- Syracuse game will take on the winner between No. 5 seed University of North Carolina and Navy in the quarterfinals. The national semifinal and final will take place at Stony Brook University in Stony Brook, N.Y., on May 25 and 27.