Former British Prime Minister Gordon Brown called for global decision making on economic matters, the need for a climate change agreement to spur industry, and education for all—especially the world’s poorest children—in a May 15 lecture before a packed house in Cook Auditorium at the Tuck School of Business.

Former British Prime Minister Gordon Brown called for global decision making on economic matters during his public lecture on Tuesday, May 15, at the Tuck School of Business. (photo by Eli Burak ’00)

“It’s time for a declaration of interdependence. The decisions that we should make, we should make together,” said the former prime minister, who led Great Britain from 2007 to 2010, during a time of economic crisis worldwide.

Brown paced back and forth in the front of the hall as he spoke, like the university lecturer he once was. He praised Dartmouth President Jim Yong Kim, saying that in his future role as president of the World Bank, Kim “has a grasp on the things that the world has got to do.” 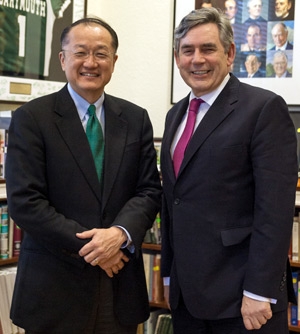 Brown received thunderous applause from the crowd, where students and many others showed up an hour early to claim seats. The 326-seat hall filled quickly, with many sitting in the aisles. Others had to be turned away.

Provost Carol Folt, who introduced Brown, called him “one of Britain’s strongest and most dedicated leaders.”

Many in the crowd were eager to hear from Brown.

Teaching assistant Tamara Boussac, who is from France and works in Dartmouth’s French Department, said she relished the opportunity to hear a politician from Europe. “Seeing a former British prime minister give a talk is just great,” she said. During his tenure, Brown “was a very important actor in everything that happened in England.”

“This is something very newsworthy. How can you live in the Upper Valley and not partake?” said Sheryl Lerner of White River Junction, Vt., who came to Hanover for the lecture.

The Labour Party politician peppered his talk with humorous anecdotes and noted that Dartmouth was founded in 1769, “when Britain still had a claim on America. And you flourished when you got rid of us.”