Dartmouth has long had a special relationship with the world of games. Richard Tait, Tuck ’88, is the inventor of the game Cranium, David Roberts ’83 is the senior vice president and general manager of PopCap Games Inc., while Brian Goldner ’85 is president and CEO of Hasbro. A number of alumni have either founded their own game companies (Justin Gary ’02, founder and CEO of Gary Games and Gamer Entertainment) or work in game design (Sam Beattie ‘ 07 of Zynga Inc.). 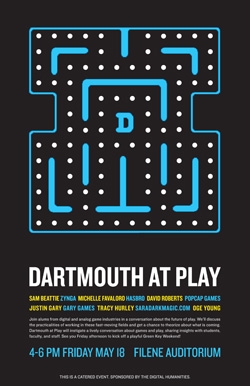 Dartmouth’s Digital Humanities program is hosting the first annual “Dartmouth at Play: Alumni on the Future of Gaming” on Friday, May 18, from 4 p.m. to 6 p.m., in Moore Hall’s Filene Auditorium.

To celebrate the alumni gaming community, Dartmouth’s Digital Humanities program is hosting the first annual “Dartmouth at Play: Alumni on the Future of Gaming” on Friday, May 18, from 4 p.m. to 6 p.m., in Moore Hall’s Filene Auditorium.

“Dartmouth seems to attract and produce an unusual number of people involved in games,” says Mary Flanagan, the Sherman Fairchild Distinguished Professor in Digital Humanities and director of the College’s game research lab, Tiltfactor. “I’m trying to unite aspiring students and campus researchers interested in games with our successful alumni who have spurred such innovation in the toy, board, and card game industries, and the digital gaming landscape.”

The event will kick off with a panel discussion on board games, followed by a panel discussion on digital games, and end with a networking event. Panelists will include Roberts, whose PopCap Games Inc. created the popular “Bejewelled” and “Plants vs. Zombies” games; Michelle Favaloro ’02, a senior brand manager with Hasbro; Oge Young ’96, an independent developer who most recently worked as a game development executive with Sony Online Entertainment; Tracy Hurley ’01, a freelance writer who has written for the game publisher Wizards of the Coast and is well-known in the Dungeons and Dragons online community; Beattie of Zynga, and Gary, who created the board game Ascension.

Gary said his success in the game industry is based in part on his Dartmouth student experience. As an undergraduate, he was such a successful player of the card game Magic the Gathering that Gary paid part of his tuition with tournament winnings.

“Dartmouth is a great place for creativity and play,” says Gary, whose finalist trophy from the Magic the Gathering Masters tournament in Nice, France, still sits on the mantle in the Alpha Theta fraternity house. “Students can easily join communities of like-minded game players and creators. Finding a good community of open-minded, intelligent gamers, is key to the iterative process of game creation.”

Tiltfactor has helped further nurture Dartmouth’s creative community since arriving on campus in 2008, while also encouraging game fans to actively study and create games in a more scholarly light, says Flanagan. Flanagan teaches a game design workshop, and her course through the Department of Film and Media Studies, “Practicum in Digital Culture and New Media Technologies: Game Design Studio,” was recently approved as a distinct course, “Game Design Studio.” Next year, a new introductory course will touch on games and play-culture called “Digital Arts and Culture.” 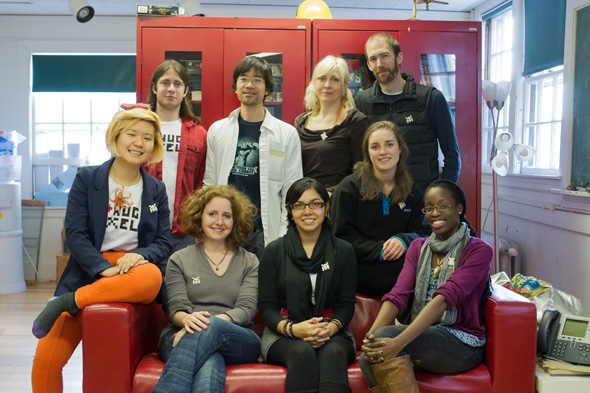 “Between Dartmouth’s deep liberal arts education, our emerging digital humanities courses, and the innovative research at Tiltfactor, Dartmouth is really at the forefront of using critical play to evoke social change,” says Flanagan. “Games that address learning, stereotypes, social biases, public health, and psychology are currently under development across campus. This really could be the century of productive play for Dartmouth.”

Description
Director of Creative Writing Peter Orner’s Still No Word From You: Notes in the Margin gets a short review, which calls him “a highly lauded author whose writing, in both fiction and nonfiction, is an act of wizardry.”
The New York Times
Photos