Former British Prime Minister Gordon Brown will deliver a public lecture during a May 15 visit to Dartmouth. 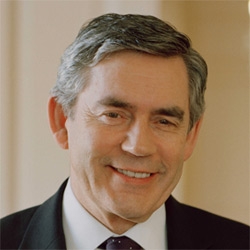 Brown’s talk will begin at 2 p.m., in Cook Auditorium in the Murdough building at the Tuck School of Business. The lecture is free and open to the public. Seats will be available on a first-come basis. The lecture is sponsored by the Office of the President.

“We’re proud and pleased to have a world leader of Gordon Brown’s stature visit Dartmouth, and we look forward to his lecture,” said Kim. Brown will speak on the global economy and the role of education.

Brown, a Labour party member, was also Britain’s longest-serving modern Chancellor of the Exchequer, a position he assumed in May 1997, when Tony Blair became prime minister, and which Brown held through June 2007. Brown served as prime minister from 2007 to 2010.

As prime minister, Brown’s major acts included passage of the Climate Change Act of 2008, which set a target for the reduction of greenhouse gas emissions, and the Counter-Terrorism Act, also in 2008, which conferred powers to gather and share information to combat terrorism. Additionally, he introduced neighborhood policing across Great Britain, and also instituted a legally-enforceable right to early cancer screening and treatment.

His greatest challenge was the worldwide financial crisis and subsequent recession. In April 2009, the prime minister hosted the G20 Summit in London where world leaders committed to make an additional $1.1 trillion available to help the world economy through the crisis and restore credit, growth, and jobs.

Brown won’t be the first former British leader to visit Dartmouth. Former Prime Minister Edward Heath was at Dartmouth in 1980 as a Montgomery Fellow, in the second year of that program. While in Hanover, Heath, an accomplished musician who worked his way through Oxford as a chapel organist, took up the baton at a Dartmouth Symphony Orchestra recital. Heath, who died in 2005, served as prime minister from 1970 to 1974.

Dartmouth’s connection to England goes back to the College’s founding in 1769, under royal charter from King George III, as the ninth-oldest and last of America’s colonial colleges. Dartmouth was named for the second Earl of Dartmouth in gratitude for his support of the Rev. Eleazar Wheelock’s efforts to establish the College.

In 2009, the 10th Earl of Dartmouth, also known as William Dartmouth, visited the College at the invitation of President Emeritus James Wright.