Archivist of the United States David Ferriero is the next speaker in the “Leading Voices in Higher Education” series. His May 14 lecture, beginning at 4 p.m., will be in Moore Hall’s Filene Auditorium. Ferriero’s talk, “From the Records of the Continental Congress to Today’s White House Tweets: The Role of the National Archives,” is free and open to the public. 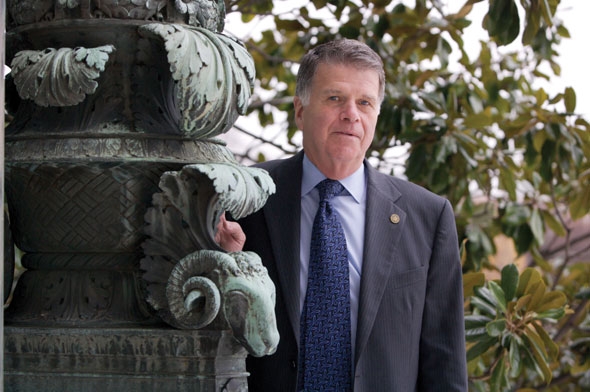 Archivist of the United States David Ferriero’s lecture, “From the Records of the Continental Congress to Today’s White House Tweets: The Role of the National Archives,” will take place on Monday, May 14, at 4 p.m., in Moore Hall’s Filene Auditorium. (photo courtesy of David Ferriero)

Ferriero is the first librarian to hold the archivist’s position. The nation’s “collector-in-chief,” Ferriero will speak about the blending of traditional National Archives practices with modern technology, particularly social media. He will explain how the archives and other federal agencies are revamping their work using new media.

Ferriero was educated at Northeastern University and Simmons College of Library and Information Science. Before completing his education, he was a Navy hospital corpsman during the Vietnam War. He then worked for 31 years at Massachusetts Institute of Technology (MIT) Libraries, a career he began by shelving books part-time while a college student.

After his work at MIT and Duke University, in 2004, Ferriero became head of the largest public library system in the United States as the Andrew W. Mellon Director of the New York Public Libraries. There, he oversaw a significant restructuring, and, after five years was nominated by President Obama to be the 10th Archivist of the United States. He is now guardian of the most important archives in the country, which include 12 billion pages of records; 7.2 million maps, charts, and architectural drawings; 40 million still photographs; 365 reels of film; 110,000 videotapes; and millions of digital records.

The “Leading Voices” speaker series is part of Dartmouth’s strategic planning process, which began last summer. Ferriero is the last speaker of the spring term. The series will return in the fall, and feature Freeman Hrabowski, president of the University of Maryland, Baltimore Campus, speaking on “America’s Science and Technology at the Crossroads.” No date has been set for Hrabowski’s talk.

The Dartmouth community has heard from a number of Leading Voices speakers this year, including humanities scholar Cathy Davidson, author of Now You See It: How the Brain Science of Attention Will Transform the Way We Live, Work, and Learn; Pulitzer Prize-winning author Louis Menand, a writer at The New Yorker and Harvard professor who writes about the role of higher education in society; and Salman Khan, founder of Khan Academy, a free, online education source with almost 6 million unique users.