Although recording one’s name in the Guinness Book of World Records is not a typical item on a Dartmouth senior’s bucket list, computer science major D. Parker Phinney ’12 will attempt to earn that distinction by constructing the world’s longest Barrel of Monkeys chain in the Hopkins Center’s Top of the Hop on Sunday, May 13, at noon. The event is free and open to the public. 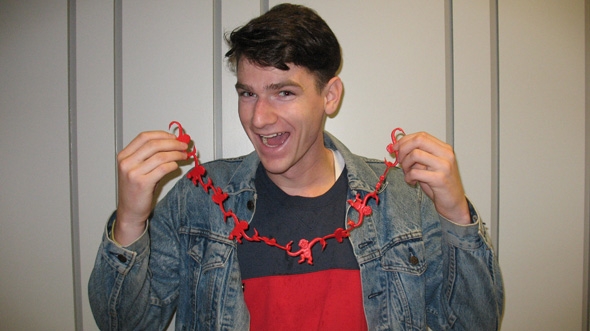 D. Parker Phinney ’12 will attempt to assemble the world’s longest Barrel of Monkeys chain during a fundraiser at the Top of the Hop on Sunday, May 13, at noon. (photo by Bonnie Barber)

The project began while Phinney, a native of Rancho Palos Verdes, Calif., was in middle school with a donation of 10,000 monkeys from Hasbro, the maker of the children’s toy. However, the plan eventually fell through once Guinness stated that the chain of monkeys had to be entirely vertical. Almost 10 years later, Phinney has managed to salvage 5,000 of those original monkeys. New guidelines that allow the chain of monkeys to be connected at multiple points, has reawakened his dream.

Currently, there is no official record in this category recognized by Guinness. Technically, Guinness has specified a minimum length of 3,500 monkeys, along with rules stating that no adhesives may be used to secure the chain.

This Sunday, Phinney will work with Thayer student Ted Sumers ’12, and Scott Silver of the Department of Theater in the assembly of this hopefully record-breaking chain of monkeys. Phinney is confident his attempt will be a success. “We did a test run last week and all the numbers check out,” he says. “The support structure can hold the weight, we have plenty of space for the whole chain, and with enough volunteers we should be able to construct the chain in just over an hour. All systems go.”

Most importantly for Phinney, this Guinness world record attempt will serve as a fundraiser for Child’s Play, a charity focused on providing toys to children in hospitals. Phinney hopes to raise $5,000 through the event—one dollar for each monkey.

“Working with Child’s Play was a no-brainer. They do great work, giving toys to children in hospitals. I’m really excited that we’re able to help them out,” Phinney says. “I still feel like even though I’m leaving college, I can keep getting excited about goofy stuff.”

The event is co-sponsored by Dartmouth Student Assembly with help from Conferences and Special Events and the Department of Theater’s scene shop.

More details about the event and information on how to contribute to Child’s Play can be found here.