When bringing change to a university, historian and longtime Princeton Dean Nancy Malkiel said it’s important to “ground the changes you make in undergraduate education in the fundamental characteristics and the long-running continuities of your institution.” 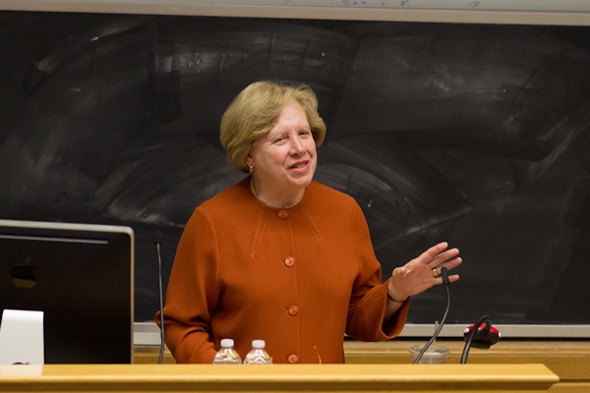 “You should be working to sustain a delicate balance, on the one hand, preserving and strengthening enduring traditions and historic commitments. And on the other hand, taking on ambitious new challenges to keep undergraduate education fresh, alive and responsive always to needs and opportunities that you may be able to foresee, or which may be just over the horizon.”

Malkiel, whose 24 year tenure as dean of the college at Princeton—a school record in that role—spoke May 1 in the “Leading Voices in Higher Education” lecture series, which is part of Dartmouth’s strategic planning process. In an interview with Dartmouth Now, Malkiel talked about the importance of the arts. 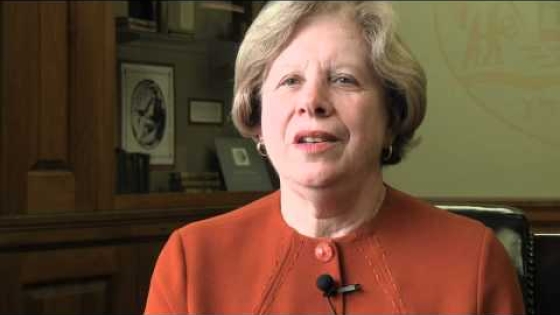 In her lecture, Malkiel discussed changes in curriculum, special programs, and admissions and financial aid at Princeton during her time as the senior officer in charge of Princeton’s undergraduate program. In that role, she was responsible for advancements including expansion of the Freshman Seminar Program, introduction of a writing program, launching the four-year college system, creation of the McGraw Center for Teaching and Learning, and the encouragement of innovation through the 250th anniversary teaching fund.

Dartmouth Provost Carol Folt said it was valuable to have Malkiel at Dartmouth during the strategic planning process. “We see so many interesting parallels in our mission,” and in what Malkiel achieved at Princeton, Folt said.

While at Dartmouth, Malkiel also spent time in the Rauner Special Collections Library to do research about Dartmouth for a book she’s writing on coeducation at Princeton and its peer institutions.

Princeton went coed in 1969—three years before Dartmouth—the same year Malkiel started teaching there as one of only three women on the faculty and the only female faculty member in the history department.

The next speaker in the Leading Voices series is Columbia Provost Emeritus Jonathan R. Cole, who speaks on Tuesday, May 8, at 4:30 p.m., in the Rockefeller Center, room 3. Future speakers also include Archivist of the United States David Ferriero, May 14, and Freeman A. Hrabowski III, president of the University of Maryland, Baltimore County. A date has not yet been set for Hrabowski’s talk.

The “Leading Voices” series is part of Dartmouth’s strategic planning process, which began last summer. The process seeks to chart a “bold and aspirational path for Dartmouth’s future in anticipation of our 250th anniversary in 2019,” said Folt.