Samantha Knowles ’12 makes documentary films. She revels in telling stories that haven’t been told before, and she is passionate in their telling. One of her advisers, Professor Mark Williams, describes her as possessing a formidable set of talents that she brings to bear in her craft. 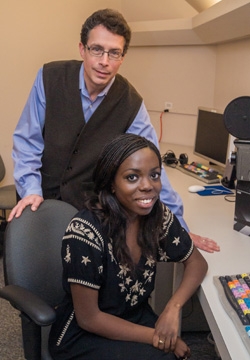 Professor Mark Williams advises Samantha Knowles ’12 as she works on her honors thesis, a short documentary film titled Why Do You Have Black Dolls? (photo by Eli Burak ’00)

Knowles found inspiration in her first campus visit. “What I came away with was that education was not defined in the traditional sense at Dartmouth,” Knowles says. “Education was not limited to the books, the exams, and the papers, but was also the activities, exposure to a diverse group of people, and the opportunities available here.”

And it seems that Knowles has taken advantage of those opportunities, specifically those that research provides. “Undergraduate research is hugely important because it gives students an opportunity to develop critical skills, gain experience, and contribute to the work that is being produced in their field,” Knowles says. “When I worked on my short documentary film, Preventing the Revolving Door, I got invaluable experience that prepared me for my thesis and for the type of projects that I plan to pursue after I graduate.”

Her filmmaking, she says, leans toward “the exploration of socially-oriented topics and issues.” Knowles’s current research project is an honors thesis in the form of a short documentary film titled Why Do You Have Black Dolls? which explores the cultural significance of black dolls.

“I’m especially excited about it because no other film like this has been done before and I feel like it’s an ideal way to address this topic,” says Knowles. It proceeds from a personal childhood experience when a play-date asked the title question. “Her question stuck with me for a long time. I can’t remember how I responded in that moment, but I saw this film as an opportunity to explore that question.”

This Dartmouth Now series highlights the research of undergraduate students in an array of academic disciplines. The week’s headlines include:

Thursday: Jenny Thapa ’12 Looks at Forestry and Socioeconomics in Nepal

“Sam’s project is inspiring and smart, invested in both the personal and communal aspects of her topic,” says Williams, an associate professor of film and media studies. “The film is historically insightful but also charming and moving. I know this has been very meaningful to Sam at various levels of engagement, and she has worked very diligently for many months to direct and produce a memorable film.” Professor Jeffrey Ruoff was Knowles’s adviser for the project in its earlier stages of production.

Knowles will eventually pursue opportunities in documentary filmmaking or nonfiction television, she says. Immediately after graduation, though, she plans to work on promoting and distributing Black Dolls. “I’ve received a lot of interest and encouragement from the black doll enthusiasts that I interviewed, and I am really looking forward to having this film reach a broader audience,” she says. She will be submitting the film to various film festivals with screenings over the summer.

“I look forward to many more films from Sam,” says Williams.