Dartmouth senior Sarah Tanaka's foray into undergraduate research on the brain takes her a step closer to medical school. 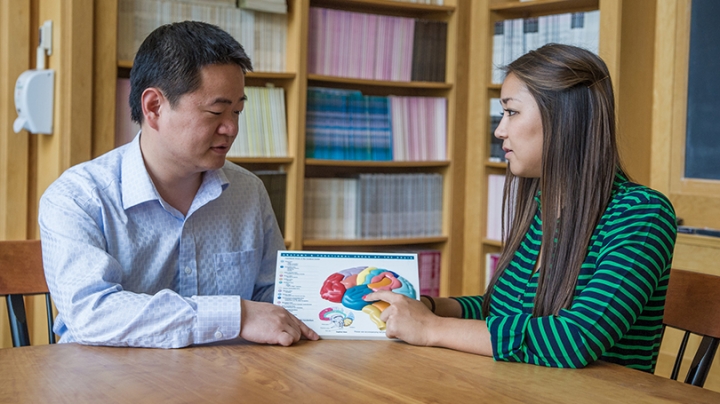 Sarah Tanaka ’12 points to a brain structure during a discussion of her research with her adviser, Professor Ming Meng. Tanaka’s research interests are directed at the brain, specifically its diseases and their resulting behaviors. (Photo by Eli Burakian ’00)
5/23/2012
Body

In leaving California for Dartmouth, research was already a draw for Sarah Tanaka ’12. The young neuroscience major felt Dartmouth was offering her the resources of a large research institution at a school that had a strong emphasis on undergraduate education. "I also wanted something completely different from home that would push me a bit out of my comfort zone," she admits, but it is the research that drives her.

“Undergraduate research is critically important in establishing the next generation of researchers and thinkers,” says Tanaka. “I feel strongly that all undergraduates should try to immerse themselves in some sort of research that they find interesting while they are in college. It is such a valuable learning experience not only about your specific project but a keystone experience in self-discovery as well.”

Her adviser, Professor Ming Meng, shares Tanaka's perspective. “Undergraduate research showcases the excellent balance between education and research at Dartmouth that makes us stand out from other colleges. It is a key and central point that defines the 'Dartmouth Experience,'” says Meng, an assistant professor in the Department of Psychological and Brain Sciences.

Tanaka's research interests are directed at the brain, specifically its diseases and their resulting behaviors. Her senior thesis explores the possible relationship between olfactory dysfunction (loss of the ability to smell) and changes in the cerebral cortex, and mild cognitive impairment (a precursor state to Alzheimer's disease).

The importance of olfactory research in Alzheimer's disease is in exploring options for early detection and diagnosis and possible detection of the disease before the characteristic behaviors appear.

This Dartmouth Now series highlights the research of undergraduate students in an array of academic disciplines. The week’s headlines include:

Thursday: Jenny Thapa ’12 Looks at Forestry and Socioeconomics in Nepal

In addition to conducting clinical testing, Tanaka also gained some unique person-to-person experience.  She “participated in a program that pairs students with people in the community that had Alzheimer's disease so that students could learn on a more personal level about what having the disease really means to a person, rather than conventional learning from a lecture or a textbook."

Robert Santulli, MD, a geriatric psychiatrist at Dartmouth-Hitchcock Medical Center (DHMC), also served as an adviser to Tanaka. Her thesis involved collaborative research between Santulli's lab at DHMC and Meng's. The project bridges clinical research in medical science and basic research in psychology and neuroscience.

"Sarah initially joined my lab as a James O. Freedman Presidential Scholar in her junior year," added Meng. "We have had interesting discussions such as how psychology and psychiatry are different but always go hand-in-hand."

After graduation, Tanaka will spend next year working as a pre-medical intern at a sports medicine private practice in Santa Monica, Calif., while applying to medical school.