Scholarship and Fellowship Wins Take Dartmouth Students Around the Globe

Dartmouth students and young alumni have gained recognition from a number of agencies and organizations that sponsor prestigious scholarships and fellowships for study abroad. Nine were awarded Fulbright fellowships. Read more about the winners and their projects below. 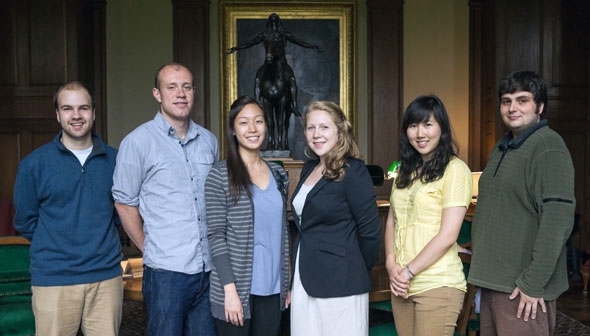 The Fulbright Program is sponsored by the U.S. Department of State and provides funding for students, scholars, teachers, and professionals to undertake graduate study, advanced research, university teaching, and teaching in elementary and secondary schools in over 155 countries worldwide.

Three members of the Class of 2013 were named to the Critical Language Scholarship Program, a program of the U.S. Department of State, which provides support for summer language study aboard. Two students, winners of the fall 2011 Gilman Scholarship competition, also sponsored by the State Department, are currently studying abroad as supported by their awards. Dartmouth also had one student each acknowledged by DAAD, the German national agency for the support of international academic cooperation, and the Boren Scholarship, funded by the National Security Education Program, which awards scholarships for the study of geographic areas, languages, and fields of study deemed critical to U.S. national security.

Earlier this year, three Dartmouth students were honored by the Morris K. Udall and Stewart L. Udall Foundation. Jason Curley ’13 was one of 80 students nationwide to be awarded a Udall Scholarship, and Nicole Kanayurak ’13 and Montana Wilson ’13 were two of 50 honorable mentions. Emma Smith ’13, an anti-genocide activist with special concern for Sudan, has been awarded a Truman scholarship to support her graduate studies after Dartmouth, and Marissa Lynn ’13 and Andrew Zureick ’13 won Goldwater scholarships, which support the next generation of highly qualified scientists, mathematicians, and engineers.

For more information on these and other programs, see Dartmouth’s National Scholarships/Fellowships website.

Christopher Zarbock ’12Hometown: Menomonie, Wis. Major: Biomedical engineering sciences, AB; engineering sciences with a concentration in biotechnology, bachelor of engineering. What’s next: Molecular biology research with a focus on protein engineering, at the Max Planck Institute of Neurobiology in Germany