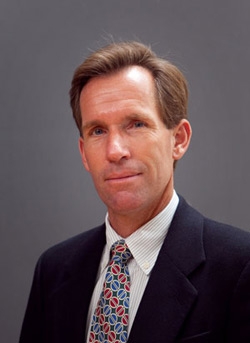 “This is about students working with policymakers at the state level and having an impact on the process. We know the Commissioner of Safety is looking closely at what the students have presented and is seeking to implement many of their findings,” said Ronald G. Shaiko, the Rockefeller Center’s associate director of curricular programs and senior fellow. (photo by Joseph Mehling ’69)

The briefing with Governor Lynch was scheduled after Amy Couture ’14, Michael Danaher ’13, Tina Meng ’14 and Ben Schifberg ’13 presented their analysis, “Performance Measurement for State Governmental Agencies: Comparative Case Studies,” to the New Hampshire Commissioner of Safety John Barthelmes earlier this year. Couture, Danaher and Meng all made the trip to Concord to present their report. Schifberg was unable to join his team at the capital.

“To have the Governor himself truly listening to and considering what we had to say was such an incredible feeling,” said Couture. “After the presentation itself, Governor Lynch had us all sit around the conference table to have a discussion about performance measurement and its validity in New Hampshire.  He and his policy experts asked us questions, and our past two terms of research gave us the knowledge to adequately answer them.”

The students produced this report as part of the Policy Research Shop, which gives undergraduates the opportunity to contribute directly to the public policy debate in Vermont and New Hampshire by providing non-partisan research to legislators on critical state issues.  The four participating students put in more than 300 hours of work on the report over their winter and spring terms.

Rockefeller Center Associate Director of Curricular Programs and Senior Fellow Ronald G. Shaiko said, “This is the 83rd student-led research brief we’ve produced since 2004. But this was the first time the document crossed the Governor’s desk.”

The New Hampshire Department of Safety reached out to the Policy Research Shop last fall and asked that they investigate a performance-based accountability system to be used within the department and its different divisions, focusing on systems for department-wide strategic planning. Performance measurement and strategic planning strive to provide clarity of mission and increase overall efficiency and productivity to government agencies by analyzing performance data to prioritize and make better decisions.

The study not only examined broad themes but also presented comparative case studies for each division at the DOS, based on interviews with senior DOS officials and a review of systems used by other states and industry best practices. The report’s findings included an audit of the Department of Safety’s seven divisions as well as a check list of specific performance measurement criteria for each department, covering executive leadership, adequate communications, and use of performance measures in evaluation and resource allocation.

The report directly addressed the critical responsibilities of the Safety Commissioner in New Hampshire and his role in ensuring the strategic direction and accountability of a statewide performance measurement system.

Danaher cited his major in economics and the global trend toward fiscal austerity as what drew him to this project. “Performance assessment offers an opportunity to provide visibility to the public about how effectively the government is spending its money and where it’s going. As a young citizen, learning about performance assessment’s potential for spending visibility was really eye-opening.”

In addition to the meeting with Governor Lynch, the PRS students also met with his senior policy staff and representatives from the Department of Safety and the Department of Environmental Services in the Executive Council chambers to discuss how to apply their findings across all state agencies and departments.

“This is about students working with policymakers at the state level and having an impact on the process. We know the Commissioner of Safety is looking closely at what the students have presented and is seeking to implement many of their findings,” said Shaiko.