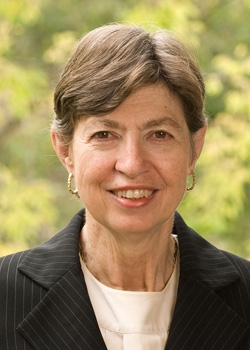 Doctor of ScienceRenowned chemist, chancellor of the University of California, San Diego, Dartmouth alumna and trustee

Marye Anne Fox is chancellor of the University of California, San Diego, where she is also a distinguished professor of chemistry. Considered one of the nation’s most creative physical organic chemists, Fox has published extensively in organic photochemistry and electrochemistry, and her work has applications in materials science, solar energy conversion, and environmental chemistry.

In 2010, President Obama presented her with the National Medal of Science, the highest scientific honor awarded in the United States. Previously, Fox served as a science advisor to George W. Bush during his tenure as governor of Texas, and later on President Bush’s Council of Advisors on Science and Technology. She currently serves on the boards of W.R. Grace and Red Hat. She has served on the University of Notre Dame Board of Trustees and on numerous other boards, including the Welch Foundation, Council on Competitiveness, Association of American Universities, University of California President’s Board on Science and Innovation, and the Camille and Henry Dreyfus Foundation’s Scientific Affairs Committee.