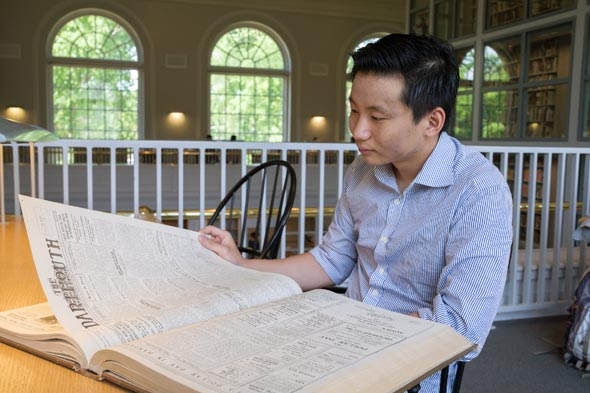 Paul K. Kim ’12 hails from Seoul, South Korea’s largest city, but fell in love with Dartmouth and small-town Hanover when he visited as a prospective student. He first learned about Dartmouth from his high school physics teacher at Connecticut’s Kent School, Randall J. Hobbs ’89. “Four years ago, before President Kim came here, not many people in Korea knew about Dartmouth,” Kim admits.

An economics and mathematical social sciences major with a minor in Japanese, Kim’s Dartmouth Experience has been marked by undergraduate research opportunities and community involvement, both on and off campus. He was an undergraduate advisor for two years (in Streeter and Richardson Halls), is a member of Beta Alpha Omega, served as a student member on the Organizational Adjudication Committee, and was a science mentor in the Upper Valley’s Rivendell School district. He also worked as a Japanese drill instructor and performed research with history Professor Steven Ericson as a James O. Freedman Presidential Scholar.

After graduation, the 22-year-old starts work with a hedge fund in Connecticut, focusing on convertible arbitrage. He plans to return to South Korea in a few years to complete Air Force officer candidate school and fulfill his military obligation.

Dartmouth Now sat down recently with Kim to talk to him about his Dartmouth experience.

I did a summer program at Columbia University during my high school sophomore year and knew right then that city schools were not for me. I fell in love with Dartmouth when I visited and sat in on a class. I loved the small class sizes and the professors who are passionate about teaching.

My favorites were “Macroeconomics” (ECON 22) with Marjorie Rose, senior lecturer in the Economics Department; “the Financial Crisis of the Noughties” (ECON 76) with Professor David Blanchflower;  “Great Depression” (ECON 85) with Professor Douglas Irwin; and “Computer Animation” (COSC 24) with Professor Lorie Loeb, research associate professor in computer science. Professor Rose’s lectures were very engaging and sparked my interest in economics. Professor Irwin and Professor Blanchflower are great scholars of the Depression and economic policy, and I learned a great deal in their classes. And Professor Loeb’s animation class was very hands-on. I had to create short clips of animation as assignments, and the class forever changed the way I watch 3D animation movies.

You wrote a research paper on the Depression and how it impacted Dartmouth for Professor Irwin’s Great Depression class. What struck you about your research findings on what Dartmouth was like during that time?

I was really surprised by the performance of the College’s endowment. The endowment not only outperformed the market and its peers, but also managed to earn low but still steady positive returns.

Despite the above-average performance of the endowment, the student life at Dartmouth was severely affected. During this time, four fraternities dissolved because their members could not afford to maintain the physical houses, and two fraternities merged to pool scarce resources in order to survive.

What was the Presidential Scholar research project you conducted with Professor Ericson?

The project was about Matsukata Masayoshi and his financial reform in 1873-1881. I assisted Professor Ericson with analyzing the trend in commodity price and its impact on the Japanese economy during Matsukata’s leadership. When he became finance minister in 1880, Matsukata introduced a policy of fiscal restraint that resulted in what has come to be called the “Matsukata Deflation.” Professor Ericson is presenting a paper in July on that topic at the World Economic History Congress.

How would you describe your Dartmouth student experience?

When someone asks me to describe Dartmouth, I always quote what football coach Lou Holtz, who led Notre Dame to the national championship in 1988, said about Notre Dame: “If you’ve been here, no explanation is necessary. But if you haven’t been, no explanation will suffice.” Then I shamelessly add that Dartmouth is better than Notre Dame.

I have had an amazing time here. The decision I made four years ago to attend Dartmouth was probably one of the best decisions I have made in my life so far. The school’s tradition and history created an environment where I felt welcomed the moment I set foot on campus. While the winter weather tested my survival skills a few times, I’ve never regretted coming here because I met so many hardworking and interesting people, doing incredible things. I’m sad that my time here as a student is almost over.