After a grueling day of rugby at PPL Park in Philadelphia, Pa., the Dartmouth men’s rugby club has once again been crowned National Sevens Champions, their second title in the USA 7s Collegiate Rugby Championship (CRC) in as many years. The Big Green powered through the competition, showing their class with consistent possession, high-pressure defense, and elite speed going forward. 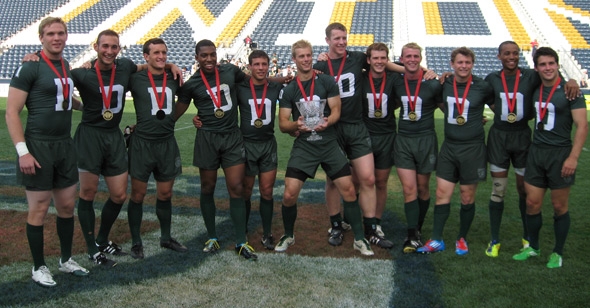 Dartmouth went 3-0 in pool play on Saturday, June 2, securing the top seed out of Pool B and a place in the quarterfinals. On Sunday, the Big Green kicked off day two of the CRC with a 35-5 quarterfinal victory against the University of Wisconsin.

In the semifinals, Dartmouth faced off against the perennial rugby powerhouse University of California Golden Bears. Dartmouth rallied from a twelve-point, 19-7 deficit in the second half to tie the game at 19 with 43 seconds remaining. Derek Fish ’12 put through the conversion, giving Dartmouth a two-point lead and the 21-19 victory.

In the title game, the Big Green faced off against the University of Arizona Wildcats. Dartmouth once again got off to a quick start, controlling possession until Kevin Clark ’14 was able to break down the sideline, fending off to get around the edge and sidestepping an Arizona player to walk in for the try. Dartmouth’s dominance over possession continued, and Will Mueller ’12 was able to add two more tries to the Dartmouth total, giving the Big Green a 19-5 lead going into the half. Dartmouth continued to maintain possession in the second half, methodically working their way down the field gaining tough yards, eventually culminating in a hardnosed try from co-captain Will Lehmann ’12 to give the Big Green the 24-5 victory.

Madison Hughes ’15 was named the tournament’s most valuable player by Rugbymag.com.  Hughes, Fish, and Nate Brakeley ’12 were named to the all-tournament team.