They have been tearing up the track all year, setting and re-breaking eight records between them while collecting medals and honors for the Big Green’s track and field team. Now Abbey D’Agostino ’14 and Alexi Pappas ’12 are headed to two of track and field’s biggest stages—the NCAA Outdoor Track and Field Championships in Des Moines, Iowa, from June 6-9, followed by the U.S. Olympic Trials in Eugene, Ore., from June 21 through July 1. 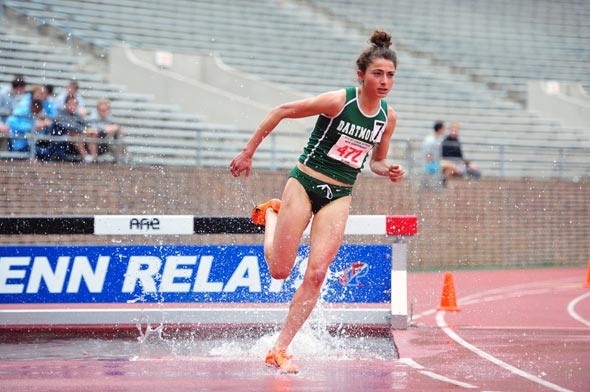 Alexi Pappas ’12 ran the fourth fastest time in Ivy League history when she won the steeplechase at the Ivy League Heptagonal Championship in May. (Photo courtesy of The Ivy League)

A four-time All-American, D’Agostino is making a return appearance to the NCAAs in the 5,000-meter, an event in which she placed third last year. All-American Pappas will be making her NCAA national debut in the 3,000-meter steeplechase after qualifying second overall at the NCAA East Regional in late May. Pappas won her regional heat by more than eight seconds in a time of 9:55.89, breaking her previous Dartmouth record. A few weeks earlier at the Ivy League Heptagonal Championship, she set a meet record when she won the steeplechase in 9:58.80 (she also placed second behind D’Agostino in the 3,000-meter with a time of 9:25.63). After narrowly missing the NCAA cut last spring, Pappas says this year she “finally put in the 100 percent that it takes to reach an elite level of running.”

The creative writing major from Alameda, Calif., whose 3.77 grade point average earned her a spot on the CoSIDA Capital One Academic All-District team, acknowledges that it has also helped to train with D’Agostino, who in just two years has established herself as one of the country’s top distance runners. “I feel incredibly lucky for her friendship and teammate-ship. We push each other and encourage each other on and off the track,” says Pappas, an aspiring filmmaker who this fall will pursue a master’s degree in interdisciplinary studies at the University of Oregon, focusing on film, English, and entrepreneurial business while also using some remaining eligibility to run cross country and indoor track for the Ducks. 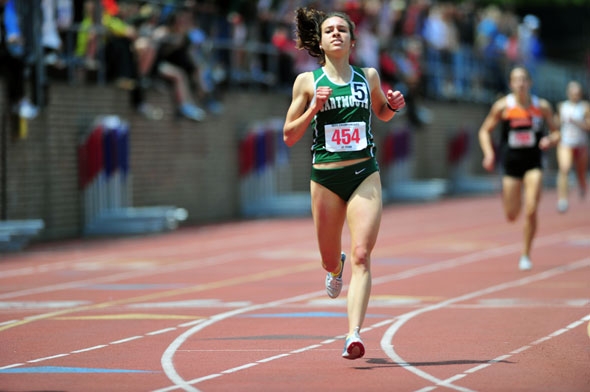 Four-time All-American Abbey D’Agostino ’14 is one of the country’s premier distance runners. (photo courtesy of The Ivy League)

D’Agostino, a psychology major from Topsfield, Mass., has had another stellar year and says that improved mental toughness has been a key to her success. “Confidence is a choice, and I think I was able to improve once I realized just how much that applies to our sport,” says D’Agostino, who will perform research in positive psychology and sports psychology this summer through Dartmouth’s Peak Performance’s program.

D’Agostino decisively won the 1,500 and 3,000-meter races at the Heps, setting meet records in both events with times of 4:17.90 and 9:24.64 respectively, and with Pappas helped the 4 x 800 relay team set a Dartmouth record and finish second. She was also named the Heps’ Female Most Outstanding Performer. On the national stage, she finished third at the NCAA Cross Country Championships last fall, she and Pappas led the distance medley relay team to third place at the NCAA Indoors in March while she finished eighth in the individual 3,000-meter, and she is one of the favorites to win the 5,000 at the NCAAs. Track & Field News, the bible of the sport, has also picked her to finish sixth at the Olympic Trials, where she’ll be competing against professional runners.

“I am most looking forward to really testing my growth as a mental runner among such talent and competition,” D’Agostino says of the U.S. Olympic Trials. “I know my body can do it, but I just need to think of my races at the trials just like any other. My main goal is to have the courage to do so, especially as a young runner.  I’m also thrilled to be traveling and experiencing the trials with Lex; we have become like sisters this year, and it’s wonderful to be able to share this with her.”

Mark Coogan, women’s cross country head coach and assistant track coach for distance runners, says D’Agostino and Pappas’ success is “no magic”—Dartmouth has created the right academic and athletic environment for them.

“They like to run, they’re having fun, they’re training hard, they’re staying on top of their academics, and they try to do the little things to take care of their bodies, like eating right and getting enough sleep,” says Coogan, the 1996 U.S. Olympic marathon runner who specialized in the steeplechase as a University of Maryland undergraduate. “They both know they have a shot at winning [the NCAAs]. I always tell the women on the team that you want to give yourself a chance to win, to be in the race with a lap or 600 meters to go. And they’ve learned that. They’ve learned how to be in the right spot at the right time.”