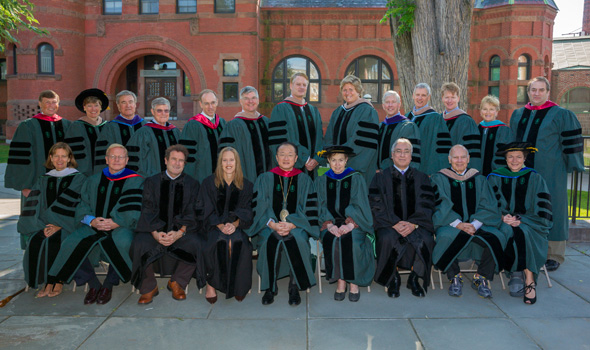 President Kim (center) and members of the Board of Trustees with the 2012 honorary degree recipients prior to Commencement on June 10. The Board was on campus last weekend for its June meeting and to participate in Commencement ceremonies. (photo by Eli Burak '00)

The building projects are the newly approved construction of a North Campus Academic Center and the Williamson Translational Research Building.

“The Board is confident the buildings approved this weekend will have a transformative impact in the years to come,” said Trustee Chair Steve Mandel ’78.

Mandel praised the strong foundation laid by President Jim Yong Kim and his administration. Kim, who bid farewell to the Dartmouth community this weekend, will begin work as head of the World Bank on July 1.

“Kim’s successor will have much to build on,” Mandel said. “The new buildings, in addition to the ongoing, comprehensive strategic planning process, will enable Dartmouth’s next president to work closely with our faculty to advance academic excellence across the arts and sciences and the professional schools.”

Kim congratulated the graduates at Sunday’s Commencement ceremony and encouraged them to apply what they have learned at Dartmouth to a higher purpose. “You have received one of the great educations available to humankind,” Kim said. “Make it work for you and especially make it work for others.”

Also at Commencement, speaker Wendy Kopp, president and founder of Teach For America, congratulated Dartmouth’s Class of 2012 and urged its members to make a difference.

“One thing I can promise you is that nothing is more energizing or fulfilling than being part of a larger effort to leave the world better than we found it,” she said. “So as you head off the Green today, I hope you will join me in resolving to contribute to solutions to our biggest problems, to resist cynicism, and to be allies for progress.”

Over the past year and a half, President Kim; Provost Carol Folt; and the deans of arts and sciences and the professional schools of business, engineering, and medicine have considered a range of strategies that would advance Dartmouth’s mission in an increasingly competitive and global higher education landscape. During Friday’s meeting the Board demonstrated its commitment to the process by endorsing measures key to academic excellence: an investment in critical new buildings to support contemporary research, teaching, and engagement and the strategic growth of the faculty.

In this context, the Board approved the construction and funding of the North Campus Academic Center, containing approximately 122,000 square feet of space, which will create a new home for academic and research programs, 18 additional classrooms, and a new location for the Dana Biomedical Library.  The center will also foster interdisciplinary work across two social science departments as well as the Geisel School of Medicine, the Dartmouth Institute for Health Policy and Clinical Practice, and the Dartmouth Center for Health Care Delivery Science.

Additionally, the Board approved final plans for the Williamson Translational Research Building, to be constructed on the Dartmouth-Hitchcock campus in Lebanon, N.H. This building is a critical component of the Geisel School’s plan to lift Dartmouth into the top 20 medical schools nationwide by 2020. The facility will house programs concerned with adapting laboratory discoveries for use in patient care, with an emphasis on multi-disciplinary problem solving in areas including neuroscience, cancer, and immunology/infectious diseases, among others.

Dartmouth’s plan will require capital investment to enable faculty growth and to promote research, teaching, and enhanced student experiences. These two new buildings, and other strategic projects, will be supported in part by the issuance of $150 million in debt funding, approved this weekend.

During its meeting the Board voted to elect Laurel J. Richie ’81 and David C. Hodgson ’78 as new Charter Trustees. They joined the Board following Commencement, as will the three new Alumni Trustees voted onto the Board in April: Nathaniel C. Fick ’99, Richard H. Kimball ’78, and Benjamin F. Wilson ’73.

Mandel said, “We are delighted to welcome Laurel and Dave to Dartmouth’s Board. Laurel’s breadth of experience in reputational development for blue chip institutions and leading nonprofits and Dave’s expertise in finance and in planning, strategy, and governance in higher education will complement and advance the already significant skill set of our Board. We look forward to working with them both.”

The Board also elected Folt, current provost and incoming interim president, as a new Trustee, effective July 1. Mandel said, “We have an exciting year ahead of us, with much work to be done. The Trustees are confident that Dartmouth will thrive under Carol’s leadership. She will provide guidance to all parts of our campus and ensure progress on a range of significant initiatives to enhance Dartmouth’s standing and excellence as a leader in higher education.”

“The North Campus Academic Center and the Williamson Translational Research Buildings are exciting projects that will improve greatly our ability to recruit and retain outstanding faculty and students and employ cutting-edge technologies in our teaching and research. They demonstrate the Board’s commitment to strategic planning and keeping Dartmouth on an ambitious trajectory,” said Folt. “These projects represent the first steps toward creating the infrastructure necessary to achieve our highest aspirations.”

“Dartmouth is deeply grateful to our retiring Board members, who have worked tirelessly on behalf of the institution and have helped create the momentum we are currently building on,” Mandel said. “I would like to thank John, Brad, Ed, and T.J. for their invaluable contributions and dedication to Dartmouth.”

The Board also thanked Carrie Pelzel, who is retiring June 30 as senior vice president for Advancement, for her 15 exceptional years at Dartmouth, during which she led the highly successful $1.3 billion Campaign for the Dartmouth Experience and united Development, Alumni Relations, and Communications under Advancement.

The Board also met with members of the Presidential Search Committee, which is moving forward with efforts to select a new Dartmouth president. The committee’s first task is to craft and release a Statement on Leadership Criteria, informed by the community input currently being gathered. To date, the committee has received hundreds of comments, recommendations, and nominations through open forums, small group and one-on-one meetings, and the Dartmouth Presidential Search website and email account.

Trustees participated in an array of weekend activities, including Commencement, Class Day exercises for undergraduates and the Geisel School of Medicine, investiture ceremonies for the Thayer School of Engineering and the Tuck School of Business, Phi Beta Kappa induction ceremony, and the ROTC commissioning ceremony.

Laurel J. Richie ’81 is president of the Women’s National Basketball Association (WNBA), the longest-running women’s professional sports league in the country. She oversees the league’s business, operations, and marketing initiatives, and is the first person of color to lead a major national sports league. Prior to her appointment in May 2011, Richie served as senior vice president and chief marketing officer of Girl Scouts of the USA, where she led the development of a new brand strategy that helped revitalize this iconic brand. Richie spent more than two decades at Ogilvy and Mather, building brands for a host of blue-chip clients including Kimberly Clark, American Express, Pepperidge Farm, and Unilever. Richie's pro-bono clients included the Museum for African Art, the Hospital for Special Surgery, and the New York City Commission on Human Rights. As senior partner and executive group director with a portfolio of global brands, her team was among the agency’s most productive and profitable. She continues to work with the agency as a founding member of its Diversity Advisory Board, supporting efforts to attract and retain top talent.  Richie was named one of the 25 Most Influential Women in Business by The Network Journal. She is a recipient of the YMCA Black Achievers in Industry award, Ebony magazine’s Outstanding Women in Marketing and Communications award, and Power 100 List. Most recently, she received the Shot Caller Award from Black Girls Rock. At Dartmouth, Richie earned her Bachelor of Arts in policy studies. She was a member of the Black Underground Theater of the Arts (BUTA) and Cobra senior society. She received the Randy B. Cardozo Memorial Award and was recognized as one of the top 10 graduates of the Class of 1981 by Dartmouth Alumni Magazine. 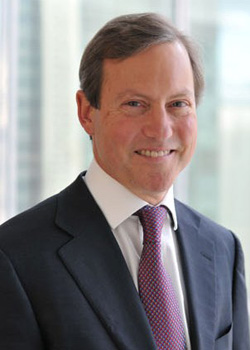 David C. Hodgson ’78 is a managing director of General Atlantic, a leading global growth equity firm providing capital and strategic support for growth companies. Hodgson joined General Atlantic in 1982, helping to found the partnership, and has more than 30 years of experience identifying and assisting portfolio companies worldwide in all areas of their development. Hodgson serves as a director of a number of public and private information technology companies including Dice Holdings Inc., InsightExpress, ipValue, Pierpont Securities, and TriNet. Hodgson graduated summa cum laude from Dartmouth College with a degree in mathematics and social sciences. He is a member of Phi Beta Kappa and received Dartmouth’s John G. Kemeny Computing Prize, awarded for innovative undergraduate computing. In 1982, he received an MBA from the Stanford University Graduate School of Business. Hodgson is chair of the board of Echoing Green, a provider of fellowship support for not-for-profit entrepreneurs, and of the Manhattan Theatre Club. He serves as a trustee of Johns Hopkins University, Johns Hopkins Medicine, and Johns Hopkins Hospital System and is chair of the Dartmouth President's Leadership Council.