Give a Rouse: Meet Danielle Levin, Dartmouth Class of 2012

Danielle Levin ’12, known to many as “Dani,” came to Dartmouth from New York City to study government, with a focus on international security. 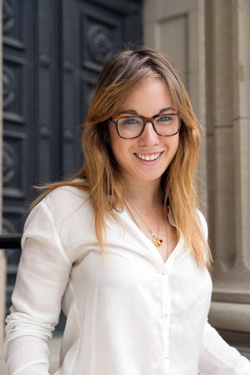 “I learned to keep myself open to new people; you never know who is going to come along and change your life here—that’s the beauty of going to a school with a student body like ours,” says Danielle Levin ’12. (photo by Eli Burak ’00)

“Naturally, I took every class except for government for the first two years, just to be sure I wasn’t missing something else,” she says. Levin also pursued an interest in Arabic language on an extracurricular basis with aspirations of ultimately applying this skill in the field of conflict mediation or international diplomacy.

It was the Dimensions show during Dartmouth’s admitted students’ weekend that seemed to lock Levin into a future at Dartmouth. “I thought if people love this place enough to put so much effort into convincing us to come, then this is the place for me,” she says in retrospect. And she has applied a herculean effort to make the place she chose as her own into an even better place—demonstrating her dedication by the activities in which she immersed herself.

Levin directed her energies toward sexual assault awareness and prevention, serving as chair of the Student Presidential Committee on Sexual Assault, and working with Sexual Abuse Peer Advisors (SAPA), Mentors Against Violence (MAV), and Sexual Assault Awareness Month. In addition, she was president of Sigma Delta Sorority and a Rockefeller Leadership Fellow.

Career-wise, Levin is interested in elected office and journalism. “If those interests continue after graduation, ultimately I will probably choose one of those paths to pursue as far as I can pursue it, and then perhaps pursue the other,” she says. Her short term plan is to work for a hedge fund in Connecticut but, she says, “I will have to see where what I learn there takes me, and how I think I can deploy my particular skills to most effectively help the communities around me.”

At Dartmouth, Levin says, “I learned to keep myself open to new people; you never know who is going to come along and change your life here—that’s the beauty of going to a school with a student body like ours. I learned a great deal about leadership and where my strengths and weaknesses as a leader lie; that has been invaluable.” She adds, “I hope, in between all that, I learned a little about international security.”