Give a Rouse: Meet Javed Jaghai, Dartmouth Class of 2012 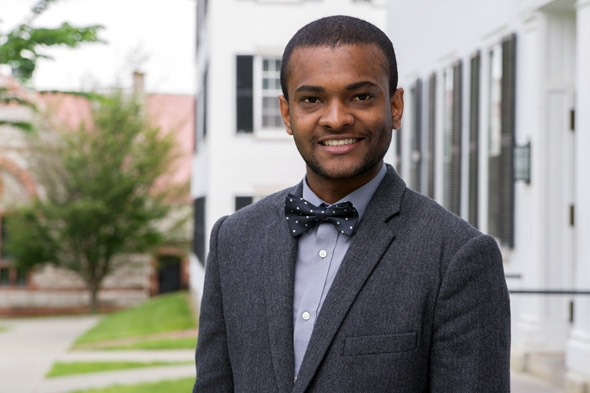 After graduation, Javid Jaghai will return to his native Jamaica for a year as a Lombard Fellow, spearheading a public education and outreach initiative by the Jamaica Forum for Lesbians, All-Sexuals and Gays (J-FLAG). (photo by Eli Burak ’00)

Javed Jaghai ’12, who hails from Port Maria, Jamaica, has an impressive history of going places and doing things.

In 2009, he travelled to Nicaragua with the Cross Cultural and Education Service Program run by the Tucker Foundation and, in the winter of 2010 as part of the Language Study Abroad program, he studied in Toulouse, France. In the summer of 2011, with support from the Rockefeller Center, Jaghai served as a public policy intern with the Jamaica Forum for Lesbians, All-Sexuals and Gays (J-FLAG) in Kingston, Jamaica.

Jaghai also participated in the Management and Leadership Development Program offered by the Rockefeller Center and the Diversity Peer Program facilitated by the Office of Pluralism and Leadership. He served as the international students’ liaison for the Inter-Community Council, which aims to build organizational connections between different campus communities. He was a leader of the Student Initiative on Global Engagement (SIGE), funded by the Kramer Prize from the Office of the President. SIGE bring together students passionate about improving the ethics and efficacy of student service, research, and internships in under-served communities globally.

Jaghai is the youngest of four children in his family and the first to attend college. “I came to Dartmouth because of the stellar financial aid program, the potential to do independent research with professors, and the allure of a tight-knit community steeped in traditions.”

His proudest achievement at Dartmouth is his Senior Fellowship project, titled (Re)presenting the Realities of Gay Jamaicans: Identity, Community Formation, and Activism (1970-2012). Jaghai explains that the “(Re)” is very significant, referencing a play on the words “re-presenting” and “representing.”

“My thesis examines the politics of homosexual identity in Jamaica,” says Jaghai. “As a gay Jamaican with a vested interest in challenging popular discourse that renders homosexuals deviant, moral lepers, and non-citizens, I have been able to explore a subject that is both academically rigorous and deeply personal.”

After graduation, Jaghai will return to Jamaica for a year as a Lombard Fellow to spearhead a public education and outreach initiative by J-FLAG. Following this, he plans to return to the United States to pursue a PhD in sociology.

“Sometimes while walking around campus I stop to marvel at the magic that is Dartmouth,” says Jaghai. “I feel very lucky that I was given the opportunity to attend school here.”