Give a Rouse: Meet Mia Jessup, Dartmouth Class of 2012

Mia Jessup ’12 wants to act in New York and has a track record to support her pursuit of that goal. 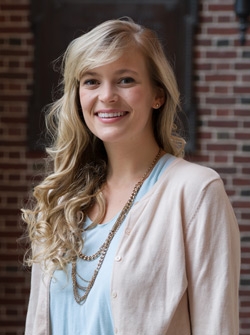 During her time at Dartmouth, Mia Jessup ’12 acted in 15 theater productions, hosted a weekly college radio show, and researched theater for social change in Hyderabad, India. (photo by Eli Burak ’00)

During her time at Dartmouth, she acted in 15 theater productions, interned with Warner Bros. Television Casting and New York Theater Workshop, directed the 2012 Dartmouth production of The Vagina Monologues, hosted a weekly college radio show, and researched theater for social change in Hyderabad, India, with the Women’s and Gender Studies Foreign Study Program.

Jessup also worked as an usher and a box office ticket seller at the Hopkins Center and says she was a proud member of the Dartmouth Rude Mechanicals, the College’s student Shakespeare company.

The San Clemente, Calif., native was a double major in theater and women’s and gender studies. “I chose Dartmouth because I could both major in theater and study abroad,” Jessup says. “At many of the acting conservatories I considered, this just wasn’t possible. Thanks to the flexibility of the D-Plan, I was able to complete an extensive theater education, and study abroad in Hyderabad, India, last winter.”

Looking back over her tenure at Dartmouth, the budding performer says, “I’ve grown so much over the past four years that it is hard for me to describe what exactly I’ve learned. I’ve come to know that for me, the truest self-worth comes from living life with sincerity and a sense of humor. I’ve learned to embrace mistakes, cherish other people, and look for beauty in every situation.”

Jessup’s comments convey a sense of true affection for the College. “I feel unbelievably blessed to have met so many kind-hearted, talented people at Dartmouth. I’m so grateful for my friends, my professors, and the wonderful staff members here. Thank you for inspiring me every day.”