Give a Rouse: Meet Motema Letlatsa, Dartmouth Class of 2012

Neuroscience major Motema Letlatsa ’12 came to Dartmouth from Butha-Buthe in the Kingdom of Lesotho—an independent nation surrounded by the Republic of South Africa. “Momo,” as she is known to her friends, was drawn to the College by its reputation in undergraduate teaching, along with encouragement from parents and friends. 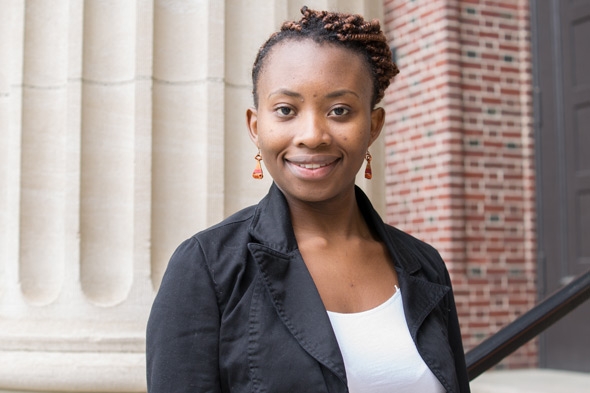 Motema Letlatsa ’12 is headed to Johannesburg, South Africa, to work with Nkosi’s Haven, an organization that offers holistic care and support for HIV/AIDS infected mothers, their children, and AIDS orphans. (photo by Eli Burak ’00)

In spite of “surprisingly brutal winters,” she gained much during her years at Dartmouth. “The most important thing I’ve learned here is to question everything,” she says. “I’ve learned to think critically of everything; that was something that was and still is discouraged in my culture. By being able to question everything, I’m much more able to understand different perspectives on different issues on a much deeper level.”

Letlatsa worked as a freshman year residential experience undergraduate adviser for three years. She chose to work with first year students because she felt this was where she could “really make a difference.” She also assisted in the Housing Office and served as a library student assistant. Through her campus experiences, Letlatsa developed enduring friendships. “The same experiences taught me that there are always options, you just need to realize that, find your passion and do what you love,” she says.

Letlatsa is headed to Johannesburg to work with Nkosi’s Haven, an organization that offers holistic care and support for HIV/AIDS infected mothers, their children, and AIDS orphans. The organization is named after Nkosi Johnson, the renowned young AIDS activist who died in 2001.