The Orozco Room in Dartmouth’s Baker-Berry Library, home to a famous mural by Mexican artist José Clemente Orozco, will be closed throughout the summer term for renovation. 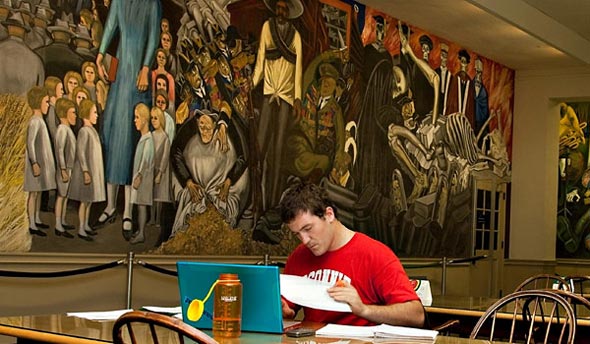 During the renovation, several improvements will be made to the study area of the Orozco Room including new seating clusters, refinished study tables, and improved acoustics. When the room reopens in September, it will feature new LED lighting of José Clemente Orozco’s mural, The Epic of American Civilization. (photo by Joe Mehling ’69)

Work on the room began June 18. It will reopen in early September, featuring new LED lighting of Orozco’s work, The Epic of American Civilization, and several updates to the study area. The frescoes, painted by Orozco between 1932 and 1934, cover a 3,200 square-foot area and detail the history of the Americas.

The renovation project is funded by a Manton Foundation grant. “We are grateful to the Manton Foundation for making the Orozco mural re-lighting project possible,” says Michael Taylor, director of the Hood Museum of Art. “The murals are one of the greatest treasures of the College and this new lighting scheme will enhance and enrich the experience of viewing this magnificent fresco cycle.”

The renovation project was scheduled for the summer, when student traffic is lighter. In addition to the new lighting, the following improvements will be made:

Cyndy Pawlek, Dartmouth’s deputy librarian and associate librarian for user services, says the renovations should make the space more inviting. Pawlek believes the room will see increased use once it reopens for fall term.

“At one time the Orozco Room was the busiest passageway on campus,” Pawlek says. “We expect it will once again be an attractive study area for students, and a welcoming area for visitors to the murals.”