A new exhibition opening in the Hopkins Center will feature the work of two recent Dartmouth alumni.

The former students, Max Van Pelt ’11 and Logan De La Cruz (Ron Chavarria ’11), received the Department of Studio Art’s Perspectives on Design (POD) Award as graduating seniors last year. The annual award, established by David and Judith Collins, recognizes exceptional work of Dartmouth studio art majors. Announced each spring term, the award helps fund the recipients’ artwork over the coming year, and culminates in an exhibition at Dartmouth at the close of the award period. This years’ POD Award exhibition runs from June 26 through September 2, in the Jaffe-Friede Gallery.

Both artists are enthusiastic about featuring their work alongside one another. 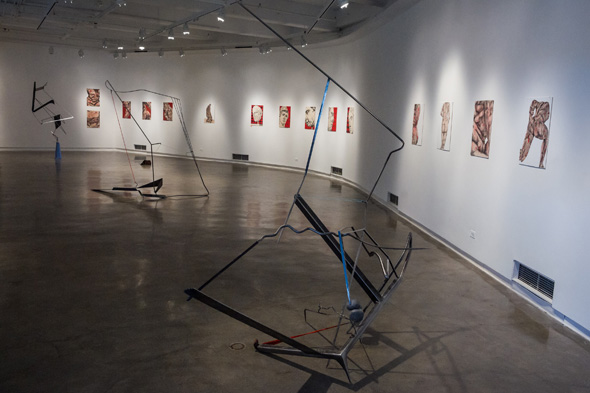 The new exhibit will run from June 26 through September 2, in the Jaffe-Friede Gallery. (photo by Eli Burak ’00)

“One of the most exciting things about this year’s POD show is the way in which our work is juxtaposed within the gallery space,” says Van Pelt, a painter and sculptor.

De La Cruz, a painter, believes that despite their different themes, the artwork complements each other.  “It’s really thrilling to see two completely unique bodies of work come together and relate so strongly despite such different media and approaches,“ says De La Cruz.

De La Cruz, who is from Miami, Fla., spent the past year working on his series in Germany. Following the POD show, he will move to New York City to continue his art career.

Van Pelt, from Boulder, Colo., interned last year for the Dartmouth Department of Studio Art. After the POD Award show, he plans to move to Providence, R.I., to establish a studio practice. Van Pelt said that knowing he’d have an exhibition for his work was motivating. “The POD show has been such a great opportunity and professional platform for us. It’s really been an added incentive to push our work this past year,” he says. “It has meant an immeasurable amount.”

An opening reception for the two POD award-winning artists will be held on Tuesday, June 26, at 4:30 p.m. in the Jaffe-Friede Gallery. Both the exhibition and reception are free and open to the public.

The time lapse below shows Van Pelt’s installation of “Responding” that was recently exhibited in the Hopkins Center’s Barrows Rotunda.