Senior lecturer Karolina Kawiaka, the area head of architecture in Dartmouth’s Studio Art Department, is one of two winners of an international contest to redesign the grounds of the Washington Monument. Kawiaka’s design, “The People’s Forum,” was chosen in an online public vote along with South Korean Jin Woo Lim’s “You and Me.” Winners of the People’s Choice for the National Ideas Competition for the Washington Monument Grounds were announced in mid-May during the National American Institute of Architects Convention in Washington, D.C. 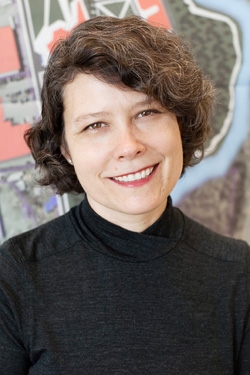 Kawiaka, who has taught at Dartmouth for 15 years and lives in White River Junction, Vt., said of the award, “It is a great honor, and very exciting, to be part of the discussion about the future of one of the great public spaces in America.”

Kawiaka’s design creates a gathering place at the base of the Washington Monument, and includes a new 3,000-seat Washington Amphitheater overlooking a Great Lawn on the north-south axis between the White House and Jefferson Memorial. The design, she said, “refocuses attention on the neglected Jefferson Pier and calls attention to Pierre L’Enfant’s original axial plan and the misalignment of the Washington Monument.”

She continued, “The original plan for Washington, D.C., defined two axes representing presidential leadership and democratic governance. Two hundred years later that vision can be realized by creating a civic space that tells the story of the Washington Monument, creates a public forum for gatherings, and completes a vision of the Mall as America’s front lawn.”

Kawiaka added that her design also includes much-needed amenities like a visitor’s center, a Washington Monument museum, a secure and accessible entry to the monument, rest rooms, bike rentals, concessions, and shady areas. 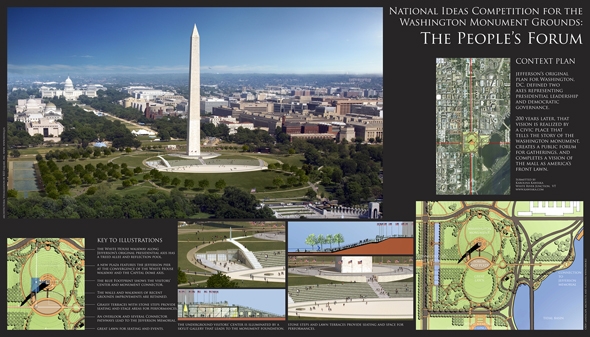 Kawiaka’s winning design creates a gathering place at the base of the Washington Monument and includes a new 3,000-seat Washington Amphitheater. (photo courtesy of Red Square)

The design competition was first initiated in spring 2010 to help address the Washington Monument’s unfinished appearance at ground level, and is led by an independent steering committee of university professors, architects and designers, and civic leaders in partnership with The George Washington University (GWU). Sponsors include the National Ideas Competition, Learning Times, Albert H. Small, GWU, the Virginia Society of the American Institute of Architects, and other educational and professional organizations.

According to an article in The Hatchet, GWU’s student newspaper, the winning designs may be incorporated by the nonprofit Trust for the National Mall, which recently selected developers to begin renovations on three areas of the Mall, including the Washington Monument Grounds. GWU Professor Adele Ashkar told The Hatchet that she “hoped to get a dialogue going between the winners of the ideas competition and the developers.”

A special exhibition, “Someday in the Park with George,” highlighting the history of the competition and entries selected by the jury will be on display at the Virginia Center for Architecture in Richmond, Va., until June 24. The Korean Embassy in Washington, D.C., will also exhibit the winning designs this summer.