Devoted to creating and presenting new works, VOX Theater was founded in early 2012 by Kate Mulley ’05, Matthew Cohn ’08, and Thom Pasculli ’05. They spent a week at Dartmouth in February, developing and staging Mulley’s play, The Reluctant Lesbian, which was directed by Pasculli and performed by alumni actors in Bentley Theater. Matthew Cohn ’08, Courtney Davis ’09, Amanda Jones ’97, and Professor of Theater Jamie Horton comprised the cast.

Now they’re back at the Hopkins Center for the Arts this week, preparing to present By So Falling, the latest play by Pasculli, who is also directing the production. Starring Hannah Chodos ’06, Andrew Dahl ’05, and Cohn, the play will be performed in the Warner Bentley Theater on Friday, July 13, at 7 p.m. Admission is free.

Pasculli, who is based in Chicago and also acts, says his play is about “transcendentalists, yoga, and aliens.” Dahl plays four characters, including Henry David Thoreau, while Cohn and Chodos each play two (one of Chodos’ characters is a woman who lives in a Mississippi trailer park).

“It’s exciting for us to be building this relationship with Dartmouth and also with the audience up here,” says Pasculli, who works primarily in physical and laboratory theater, and most recently served as the assistant director for Hot L Baltimore at Steppenwolf Theater in Chicago. “We’re trying to build a place for new works and there’s a great focusing of energy up here.” 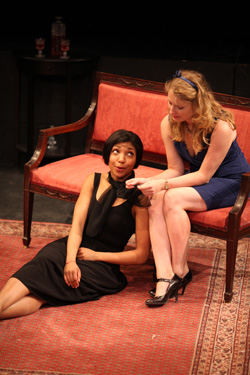 Courtney Davis ’09 (on floor) and Amanda Jones ’97 (on couch) in Kate Mulley’s play, The Reluctant Lesbian, which was produced at Dartmouth in February 2012. (photo by Rob Strong ’04)

Mulley, whose play The Reluctant Lesbian will make its New York premiere at the New York International Fringe Festival on August 10 (with Katie Lindsay ’11 assistant directing and Stacey Derosier ’12 doing the lighting design), says that being back at Dartmouth, away from the distractions of New York City, makes it “much easier to immerse yourself in the process. And the amount of resources the theater department can offer is really impressive. Scott Silver, the tech director, has gone above and beyond, the costume department has been very generous, and having a wonderful space like the Bentley to rehearse and perform in is great.”

Cohn, who starred in Hair and several other Department of Theater productions as an undergraduate and also lives in New York, says that he and his fellow Dartmouth theater graduates “share an artistic vocabulary. There’s an ease, and the artistic process is easier than if we were all strangers. And it’s exciting to be back here, working with our old professors. The theater department has been very supportive, and we’re hoping to continue coming back at least twice a year.”

During their week-long residency, the members of VOX Theater also met with Professor Peter Hackett’s Theater 65 class, “Drama in Performance.” Rachel Decker-Sadowski ’14, an engineering major minoring in theater, says she enjoyed their lively discussion with the alumni.

“It was also really interesting to see all the different paths each person in the company took to end up where they are today,” says the Santa Barbara, Calif., native. “Some went to graduate schools, some went to different countries to work, but eventually each one ended up wanting to work with Dartmouth people. To create new work, it seems vital to be surrounded by a group of people you trust and respect, which would be easy to find in other Dartmouth graduates.”